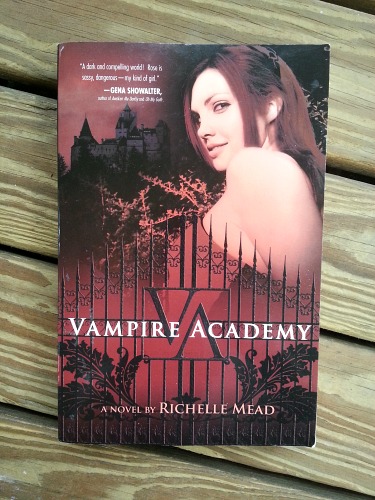 Lissa is a Moroi princess – a mortal vampire with a magical connection to the earth’s elements. Rose, her best friend, is a dhampir – half human, half vampire, dedicated to protecting Lissa from the Strigoi. The Strigoi are Moroi who have lost their powers but gained immortality and immense strength and speed. They are determined to continue to turn Moroi and eventually destroy them. Lissa and Rose ran from St. Vladimir’s school, but have been brought back to the secluded Montana woods to continue their junior year of high school. But the girls discover the school may be more dangerous than the outside world.

I apologize if my summary is a little muddled – I don’t always like to quote from the back of the book, but this book has a lot going on and it was hard to be concise.

What I liked:
People generally seem to love this book (and series) and after reading the blurb, I thought I would too. Unfortunately, there wasn’t much I enjoyed about this book, which is really disappointing. No one likes to read books they don’t enjoy, right?

But the concept of this book is what made me decide to read it – the different types of vampires and the dynamic I assumed would occur – and that is what I enjoyed about this book, though I wish it had been developed further. The Moroi are mortal vampires, they don’t seem to be any stronger than your average human – and I am guessing this means they can be killed any way a human can, though it wasn’t really touched on in the book – and they are sensitive to sunlight. But they have magical powers related to one of Earth’s elements: fire, water, earth and air – this is something I wish Mead would have spent more time on. They also drink blood but still need food.

The Strigoi are your more “traditional” vampires – I learned that Moroi turn to Strigoi when they kill a human by drinking their blood, or when a Strigoi turns them. They’re immortal, fast, strong, and they’ve lost their powers and many of their emotions as well. The dhampir are the bastard children of Moroi and humans (or dhampir and Moroi) – they’re faster and stronger than humans, but they have no restrictions to sunlight and don’t feed off blood. They dedicate their lives to protecting the Moroi from the Strigoi and are essentially bodyguards. Why? That part I’m not sure about…

What I didn’t like:
The writing just didn’t grab me. Like I said, I liked the concept, but I didn’t connect with this book. Part of me feels like maybe Mead was putting too much into one book, lightly glossing over everything, and as a result, I didn’t feel very invested. The characters were flat, the love story predictable, and even the action scenes didn’t grab me. Sure, Rose is snarky, brash and unafraid to say or do what she wants, but I didn’t like her. I didn’t dislike her either; I just didn’t care. The book picks up in the last fifty or so pages, but even then I wasn’t surprised by the plot and had already guessed half of it. Sadly, I won’t be continuing with this series.

But don’t let my review discourage you! There are plenty of people who rave about this book and series – I think maybe if I was younger it might have grabbed my interest more. Or perhaps I set the bar too high when going into this book. I still like Mead’s vampire dynamic and perhaps the differences between the classes and the magical elements develop in further books.

[·_·[] Today I bring you my February wrap up.
[·_·[] if you're interested in the general lore and medicinal properties of common plants, then j recommend Folk Magic and Healing from @liminal_11. They sent this to me in exchange for my honest review and I found this to be a lovely little book.
[·_·[] My dear @me_honeybee passed on these two comics to me because we both thought I might enjoy them…we were wrong! xD