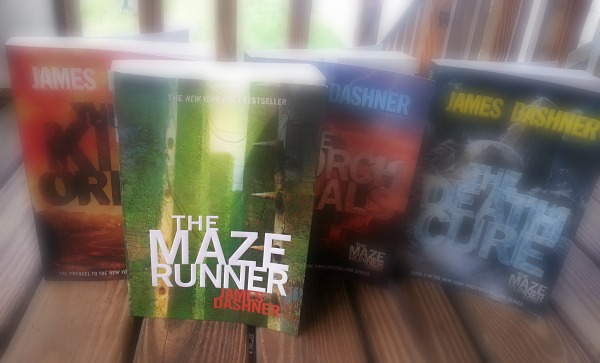 The Maze Runner
By James Dashner

Thomas wakes up in a lift, no memory of where he is or who he is, only his first name. He soon discovers he’s been trapped in The Maze with about 50 other boys, all clueless as to their past and striving to solve this impossible puzzle and make their escape. The Maze changes daily and is full of dangerous creatures, but all the boys hold the hope that whoever put them in this place, left them with a way out. Thomas is determined to become a Runner, someone who explores the maze and find an escape route. The day after Thomas’s arrival, however, a girl arrives – the first to be sent to The Maze – and everything changes.

What I liked:
The Maze Runner is fast-paced and exciting. From the first page, I was instantly intrigued and I enjoyed Thomas as a narrator – I connected with him. I was as clueless as Thomas to his new situation and just as frustrated as he was when he was struggling for answers. I seriously could not put this down and stayed up past midnight just to finish (and then immediately read a few chapters of book two, The Scorch Trials) and I was constantly second-guessing the information Thomas was given, trying to figure everything out. Dashner kept me invested in the characters and the plot and so far I’m really enjoying this concept.

There’s quite a bit of hype about this book and many times I get nervous when everyone seems to love a book – I’m always afraid that I won’t love it, or that my expectations will be too high (i.e. The Vampire Academy and Divergent series). I may have mentioned this before, but I hate to read a book I don’t enjoy (who does?) and I worry with big hits like this that I’ll be in the minority. But I tried to stay away from reviews on this book (and information about the upcoming movie) and Dashner didn’t let me down.

What I didn’t like:
I only have one complaint, that I won’t go into much detail on because I try to remain spoiler-free with my reviews. But there was a scene towards the end that felt like cheap drama. It was a common plot device that I feel is cliché, and in this case, I also felt it was unnecessary. Dashner set me up to expect this, however, and I was really hoping he would switch things out and find another way to portray the scene. But he didn’t and instead of being impacted, I was rolling my eyes saying “saw that coming.” Personally, I don’t think it’s unusual for authors to use common, cliché plot or character devices, but I was disappointed all the same.

I hope the rest of this series keeps me as thrilled and invested as book one does. If you’re into YA dystopias, give this book a chance. It feels fresh and as I’ve said many times (sorry, not sorry) the action will hopefully pull you in and keep you wanting more!