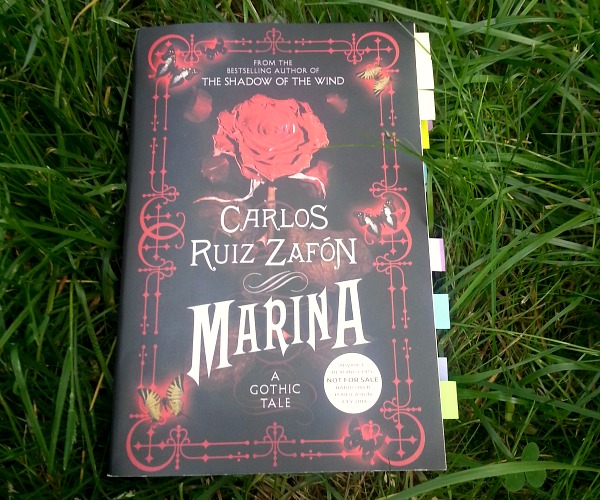 I received this book for free from LibraryThing’s Early Reviewers Program in exchange for an honest review. This does not affect my opinion of the book or the content of my review.

Blurb from Amazon: “When Fifteen-year-old Oscar Drai suddenly vanishes from his boarding school in Barcelona, no one knows his whereabouts for seven days and seven nights.

His story begins when he meets the strange Marina while he’s exploring an old quarter of the city. She leads Oscar to a cemetery, where they watch a macabre ritual that occurs on the last Sunday of each month. At exactly ten o’clock in the morning, a woman shrouded in a black velvet cloak descends from her carriage to place a single rose on an unmarked grave.

When Oscar and Marina decide to follow her, they begin a journey that transports them to a forgotten postwar Barcelona–a world of aristocrats and actresses, inventors and tycoons–and reveals a dark secret that lies waiting in the mysterious labyrinth beneath the city streets.”

What I liked:
According to Amazon, this book has been a “cult classic” in Spain (looks like it was published there back in 1999) and I can see why. I will say that I’ve yet to read anything else by Zafón and now I’m almost afraid to because I worry it won’t live up to my extreme love for this book. As you can see from my picture, I have quite a few stickies marking passages in this book – those are all positive markers! They’re thoughtful quotes or beautiful descriptions that I wanted to highlight. I have a lot of thoughts on this book, so pardon me if my review is less than coherent.

I was instantly absorbed into the plot and the “old quarter” of Spain that Zafón presents in this book. It’s set in the 80’s, but in my mind, I was immersed in the architecture and gothic touches of the late 1800s. Zafón does an excellent job of describing the old buildings with just enough detail, yet I was free to add my own touches. I really ran with the gothic theme and I was loving what I was seeing in my head. When I was about a third of the way through this book, I had the idea that it should be a video game – and I mean this as a compliment. I feel the atmosphere Zafón created is perfectly suited to a sort of mystery/adventure/puzzle game – maybe even something like Heavy Rain, where your actions can affect the entire outcome of the game. I just desperately wanted to see the entire world in some sort of animated graphics – I wanted to creep around corners with Oscar, break into crumbling old buildings, and run from the monsters he fought. It would even make a great film, by Studio Ghibli or the people that made Coraline.

I don’t want to say too much about the story because I think you should just read this book yourself. But Oscar and Marina discover a photo album that leads them on a dark adventure. They meet several people who are enmeshed in this old tale and as they speak to each person, the story becomes more layered. It was interesting to try to figure out who was telling the truth, or maybe whose perspective on past events was more accurate.

There was a bit of a horror aspect to this story,  but not in a gory sense. But Zafón did create some…monsters that made my skin crawl a little. Again, I really don’t want to reveal too much, but I enjoyed the villain’s slow descent into madness and the horror that he became. I also appreciated that the romance in this novel was very downplayed. I am guessing this book is being marketed as Young Adult, due to the fact that the back cover says ages 12+. Lately, I feel like every YA book I pick up has this “epic” insta-romance where special snowflake boy and special snowflake girl are both special snowflakes and super in love because that’s what happens when you’re a teenager. There was a relationship between Oscar and Marina but it felt so normal to me – it didn’t seem forced for the sake of having some romance – and it certainly wasn’t the highlight of the book. Honestly I didn’t even feel like I was reading a YA book (not that YA books are bad! I read them all the time) because Oscar and Marina felt a little older and Zafón’s writing style didn’t have that condescending tone that YA books sometimes have – as though they think readers can’t figure out important things on their own.

I also appreciated Oscar’s character flaws. He’s not incredibly self-confident, and at one point admits to Marina that he’s not quite sure where he’s going in life or what he wants to do – that really resonated with me, personally. He made mistakes in this book and sometimes his actions led them into deeper trouble. Again, sometimes I get bogged down by all these special snowflake characters who have all the powers and all the answers and they just have to fight the bad guys and win. In this book, Oscar and Maria often don’t know what they’re up against or what move to make next.

Honestly, I don’t have anything negative to say about this book. I flew through it and was left wanting more of Oscar’s world. This book made me curious, excited, creeped out and sad – a lovely little emotional rollercoaster! I would recommend it to anyone who likes YA, or adult, gothic fiction or mystery. It didn’t change my life, but it was an excellent first impression for Zafón and his prose was a treat to read.

I changed my mind – even if you’re not a fan of YA/adult gothic fiction/mystery, just read this book!