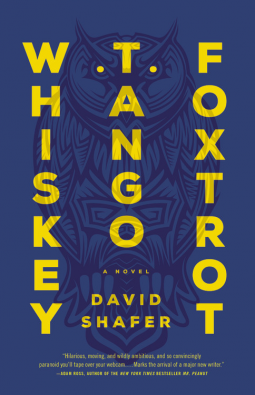 I received this book for free from Netgalley in exchange for an honest review. This does not affect my opinion of the book or the content of my review.

Blurb from Netgalley: “The Committee, an international cabal of industrialists and media barons, is on the verge of privatizing all information. Dear Diary, an idealistic online Underground, stands in the way of that takeover, using radical politics, classic spycraft, and technology that makes Big Data look like dial-up. Into this secret battle stumbles an unlikely trio: Leila Majnoun, a disillusioned non-profit worker; Leo Crane, an unhinged trustafarian; and Mark Deveraux, a phony self-betterment guru who works for the Committee.”

What I liked:
My e-book didn’t come with any cover art, but I have to say the cover design for the hardcover is wonderful. I love the bold font and that shade of blue, with the owl in the background (though I must have missed the significance of the owl throughout the story…) and I think it would be wonderful for the font or the owl to be raised off the cover slightly.

I admit, though I was approved for this book shortly after I requested it, I forgot the plotline almost immediately. I went into this book having absolutely no idea what it was about – seriously, I couldn’t remember why I requested it. I decided not to re-read the blurb on Netgalley and instead went in blind. I think this resulted in me enjoying the book a little more than I normally would have because I had no expectations for the plot; I trusted that my past-self had some interest in this book and left it at that.

What I found was a wonderful character study. Leila, Leo and Mark were all real, believable characters. Really, the majority of this book is focused on how these characters think and feel, how they react to the world around them and what they want from it. The plot almost seemed secondary and as a result it allowed these people to shine. Shafer’s humor was also very clever – several little descriptions or phrases had me chuckling. I enjoyed his style.

+ Vocabulary Alert + Shafer used several words I’d never heard before and I enjoyed learning them!
vizslas – any breed of hunting dogs of Hungarian origin that resemble the Weimaraner but have a rich, deep red coat and brown eyes
sirocco – a hot or warm wind of cyclonic origin from an arid or heated region
docent – a college or university teacher or lecturer; a person who leads guided tours, especially through a museum or art gallery
comorbid – existing simultaneously with and usually independently of another medical condition
solipsism – a theory in philosophy that your own existence is the only thing that is real or that can be known
rhizome – a thick plant stem that grows underground and has shoots and roots growing from it
promulgate – to make an idea, belief, etc, known to many people

What I didn’t like:
This book left me with a lot of questions about the two groups – Dear Diary and the Committee – and how some of the technological aspects of this book really function. While I enjoyed experiencing the world from Leila, Leo and Mark’s perspectives, I have to say that none of them seemed to ask enough questions about their respective sides – or maybe they weren’t asking the right questions. Leila is approached by Dear Diary and at first she questions them about their organization and what they plan to do to if they can defeat the Committee, but DD isn’t very interested in answering a lot of questions and so she gives up asking and just joins them. She is invited to take DD’s “eye test” which involves her looking at a super-computer (which is somehow plant-based – don’t get me started) for about 3 seconds, after which she receives her very own serial number and a heightened sense of reality. Thus, she’s inducted into the ranks of DD. Leo’s decision to join is even quicker and his near immediate acceptance of their mission left me confused.

The idea that there could be a shadow government, monitoring all our electronic correspondence and mining our personal data only to sell it back to us, is not inconceivable to me.

Yet, plant-based computers that can be grown in a field, an “eye test” that gives you a heightened sense of reality, a better understanding of the world around you and a convenient serial number that all other resistance members can immediately identify just by looking at you, is a bit much for me to believe. Shafer just didn’t convince me that these elements were possible in our current universe.

The blurb on Netgalley also describes this book as “a suspenseful global thriller and an emotionally truthful novel about the struggle to change the world in and outside your head.” Unfortunately, I have to disagree with that statement a bit – to me, this book was very lacking in suspense. As I said earlier, the plot seemed secondary and as a result this battle between the two organizations was downplayed and I never felt any sense of urgency or drama.

Let me amend my previous statement; this book did have suspense – the absurd cliffhanger ending. The plot of this book was incredibly slow-moving until the last 50 or so pages where there’s a build-up of the tension between the two sides and a call for action. Then the book ends. That’s it. There’s nothing even close to a resolution at the end of this book and as a result it felt incomplete. I understand the use of cliffhangers – I really do. But I also hate waiting a year (or more) for the conclusion of a book. If the ending isn’t handled right it can feel like a cheap ploy to get you to read the next book in the series and I hate to say that’s what I felt happened here.

Unfortunately I don’t think this book left a big enough impact on me to make me want to wait for Shafer’s next book (whenever that might be due out). I enjoyed the core idea of this novel – information security, how our information could be controlled, the idea of big businesses hijacking our data only to sell it back to us as a further means of controlling us. But Shafer’s intense character development let the plot fall to the wayside and he waited until the very end of the book to get to the meat of the subject matter, leaving me wishing he had handled the book differently. Again, his writing is clever and I’d pick up another of his books in the future, just not anything else from this series.