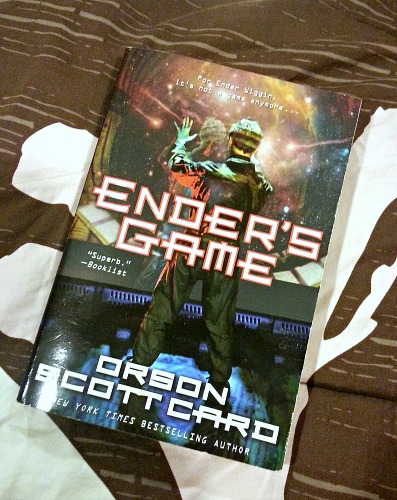 nos·tal·gia [no-stal-juh] – noun:
A sentimental longing or wistful affection for the past, typically for a period or place with happy personal associations.

I read Ender’s Game by Orson Scott Card sometime around fourth or fifth grade and loved it. Since then I’ve read it once or twice more and I love it just as much, if not more, because I’m older and I can understand the depth of this novel.

In order to develop a secure defense against a hostile alien race’s next attack, government agencies breed child geniuses and train them as soldiers. A brilliant young boy, Andrew “Ender” Wiggin lives with his kind but distant parents, his sadistic brother Peter, and the person he loves more than anyone else, his sister Valentine. Peter and Valentine were candidates for the soldier-training program but didn’t make the cut–young Ender is the Wiggin drafted to the orbiting Battle School for rigorous military training. Ender’s skills make him a leader in school and respected in the Battle Room, where children play at mock battles in zero gravity. Yet growing up in an artificial community of young soldiers, Ender suffers greatly from isolation, rivalry from his peers, pressure from the adult teachers, and an unsettling fear of the alien invaders. Is Ender the general Earth needs?

I know that Card’s personal opinions have caused some controversy, but I’m in love with his writing. Ender’s Game was first published in 1985 and has several sequels, though I’ve never read them. Personally, I’m happy with the way Ender’s Game ends and I’ve never felt like I needed to read any more in that universe.

When I was younger, I didn’t read as much sci-fi as I do now, and this may well have been the first sci-fi novel I ever read. I was fascinated with the world Card created, and though it was sometimes scary, I would have loved to explore the training station Ender lived in. I was primarily accustomed to fantasy novels with castles and knights, or the more comedic children’s books, like Sideways Stories from Wayside School.  The new territory that Card presented to me was absorbing and if I remember correctly, I did really well on the book report/test for this book in school. As an adult, I’m impressed with the way that Card wrote about Ender and his experience – the loneliness and isolation he felt, mixed with his determination to be a great leader is very compelling.

Anyone else an Ender fan? Have you read the whole series?  I’ve no interest in the movie. My love for the book aside, it just didn’t look like a good film.