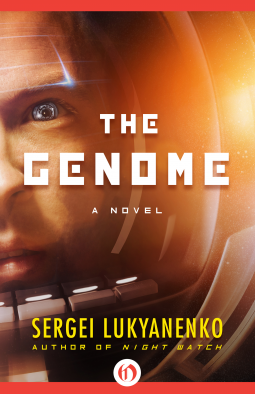 The Genome
By Sergei Lukyanenko

From NetGalley: Five months after the horrific accident that left him near death and worried that he’d never fly again, master-pilot Alex Romanov lands a new job: captaining the sleek passenger vessel Mirror. Alex is a spesh—a human who has been genetically modified to perform particular tasks. As a captain and pilot, Alex has a genetic imperative to care for passengers and crew—no matter what the cost. His first mission aboard Mirror is to ferry two representatives of the alien race Zzygou on a tour of human worlds. His task will not be an easy one, for aboard the craft are several speshes who have reason to hate the Others. Dark pasts, deadly secrets, and a stolen gel-crystal worth more than Alex’s entire ship combine to challenge him at every turn. And as the tension escalates, it becomes apparent that greater forces are at work to bring the captain’s world crashing down.

I thought I would have more to say about this book when I finished, but the truth is, I’m on the fence. The Genome wasn’t what I expected – I thought there would be some more action, but it seems this was more of a psychological sci-fi. I think there was an overall message about human nature that I wasn’t really picking up on.

This book was primarily character-driven, and due to the slow pace and Alex’s constant introspection about every situation, this book felt too long and I ended up being bored. It’s not to say I disliked the book – but I don’t really think I liked it either. I wouldn’t recommend this book, but mainly that’s because going into it I thought there would be space fights or something.

Unfortunately, I really don’t have much more to say about this book, though I will say that I enjoyed the writing, despite being a little bored with the plot.

1 thought on “Book Review: The Genome”