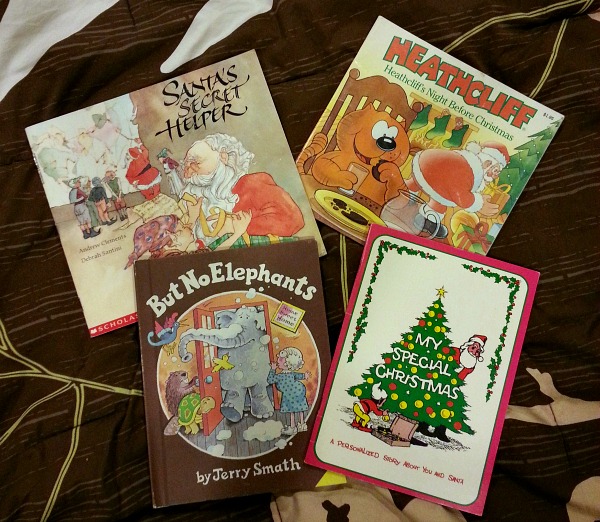 nos·tal·gia [no-stal-juh] – noun:
A sentimental longing or wistful affection for the past, typically for a period or place with happy personal associations.

Since it’s December I wanted to do a sort of holiday post – in reviewing my bookshelf, I realized there’s a lack of holiday-themed books, but I found a few cuties from my childhood to reminisce about.

First off, there’s My Special Christmas, which is a personalized Christmas story, so one of the main characters of the story is me! 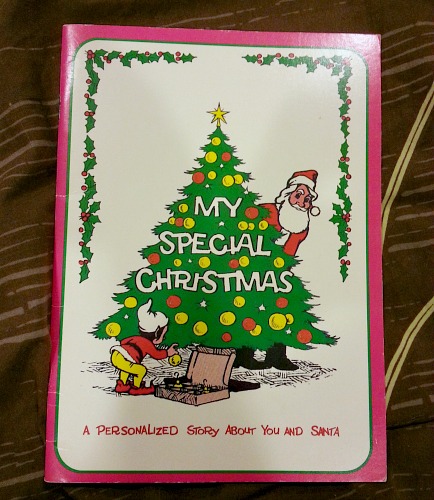 This is one of two books I had as a kid that had my name in it – I’m not sure where my family purchased them from, but I remember being excited that a book I was reading had my name in it. This one sends the reader on a special mission by Santa and his elves to travel around the world and collect letters. In the end they spell out ‘peace’ and that’s Santa’s Christmas wish to everyone around the world. According to the end of the book, it was the best Christmas I ever had.

Next up is Santa’s Secret Helper. To be honest, I don’t remember when or how I received this, but it wasn’t as a young kid. I’m pretty sure it was a gift given to me because of the wonderful art style.

In this story, Mrs. Clause decides to help Santa with delivering all the presents and enjoys her trip around the world. The art style is loose, with a hand painted look and it’s very pretty. One of the reasons I love children’s books is because of the artwork you can find.

I vaguely remember watching the Heathcliff cartoon as a child – not sure why I still have this book honestly, but it’s cute so why throw it out?

In Heathclliff’s Night Before Christmas, Heathcliff basically ruins things on Christmas Eve because he eats all the snacks they left for Santa and the family is worried he won’t show up. He leaves the house, feeling bad, and stumbles upon a bag of Santa’s toys – he’s able to catch Santa before he leaves, and as a reward for rescuing the toys, Santa lets Heathcliff tag along with him. In the end, Heathcliff’s family gets their presents and everyone is happy. Totally cheesy.

Last up, I have one of my favorite children’s books, But No Elephants. It’s really not a Christmas book, but part of it takes place in winter, so it counts.

Essentially, little old Tidly lives alone, until a traveling pet salesman stops by and sells her a canary. This is great, Tildy is just adamant that she won’t buy an elephant. The salesman comes back repeatedly, selling her a beaver, turtle, and woodpecker, all of which help her around the house. Finally, he comes back with his last pet, an elephant, which of course, Tildy doesn’t want. She refuses to buy him, but the salesman leaves him behind and winter comes with the poor elephant still outside. Eventually, Tildy takes him in and he wrecks everything by breaking through the floor and eating all the food. Everyone is pissed and they think they’re going to die in this harsh winter, but the elephant saves the day by walking them all the way to a tropical paradise (with other elephants!) and then everyone loves him.

It sounds ridiculous, but seriously, it’s an awesome book. In fact, it’s here on Amazon.

I hope everyone has a wonderful holiday season, whatever you celebrate, or just a nice winter if you don’t celebrate anything! I’d love to hear about any books you enjoyed reading as a child.

[·_·[] ok, I read this graphic novel like a million years ago and should have posted about it sooner because it's super cute. It's magical, has a non-binary protag, and a lot of heart.
[·_·[] just a smol conky boi and a pile of books I keep trying to read but also adding to.
[·_·[] my picks from @bookofthemonth arrived! See, sometimes I do pick books outside of the sci-fi and fantasy realms. I'm really expecting to like Chloe Brown...whenever I get around to reading it 🤣