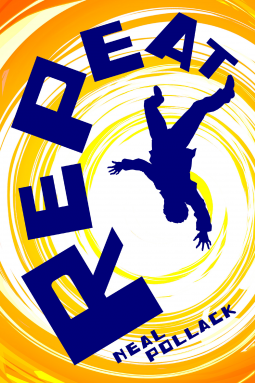 From NetGalley: Through strange metaphysical circumstances, failed screenwriter Brad Cohen finds himself caught in an infinite time loop, forced to relive the first forty years of his life again and again. Each “repeat,” Brad wakes up in the womb on what was supposed to be his fortieth birthday, with full knowledge of what’s come before. In various timelines, he becomes a successful political pundit, a game-show champion, a playboy, and a master manipulator of the stock market, but none of them seem to lead him out of his predicament. As he realizes he wants to break out of the loop and find the love of his life—the one he hadn’t appreciated the first time around—Brad tries, fails, and tries again to escape the eternal cycle of birth and rebirth. Repeat answers the question: If you could live half your life over, would you do things differently?

What I liked:
The concept – rather than living the same day over, as in Groundhog Day, Brad is forced to live 40 years of his life over and over. He never experiences anything beyond his fortieth birthday, yet he is still basically born with the knowledge of the future that gives him a certain amount of power. In the beginning of the book, before being stuck in this loop, I also liked Brad. He was funny in your everyman, semi-loser sort of way – someone who is stuck at the low end of the middle class, with a family he loves, yet generally dissatisfied with the direction his life has taken as he laments lost opportunities. He had a  good sense of humor to start with and gave me a few chuckles.

What I didn’t like:
Unfortunately, I lost interest in this book fast. The very first time Brad enters this unending time loop, he describes emerging from the womb and breastfeeding with more detail than I needed. I understand that being born again with your 40-year-old mind and actually having the consciousness to be aware of your birth would be shocking, but I can imagine that on my own, thank you. The detail that Brad puts into describing both his desire and reluctance to breastfeed was also unnecessary – it came off more as a weird fantasy and somehow felt dirty. Brad then proceeds to greatly describe the joys of masturbating at age eleven, with the skill and technique of an adult male – another strange segment that came off as a disturbing fantasy I could have gone without. I don’t consider myself to be a prude, so maybe it’s simply because I’m reading from a female perspective, but there was a big disconnect for me at this point in the book, and from that point, I less invested in the overall story.

As Brad continually begins his life anew on the eve of his fortieth birthday, readers are fortunately spared more details regarding breastfeeding and masturbation, but I still found my mind wandering off. Again, I think the concept of this book was strong, but there was something about the way Pollack handled the repetitions that just didn’t hold my interest. There is a little darkness to this story – Brad lives many “successful” lives as a wealthy man, pursuing different careers, taking advantage of his knowledge of stocks, sports statistics and presidential elections, but none of these lives make him truly happy, as he’s missing his wife and daughters in each of them. However, I didn’t find any of his repeats particularly gripping, and so I didn’t really feel for Brad or pity his situation. I think perhaps this book might have suited me better if it were a novella or short story, with a little more edge to it.

In the end, Repeat had a predictable ending and main character I considered to be a little bland, considering how many times he lived his life over.

[•_•[] Another review copy from @torbooks arrived the other day. 🙏
[•_•[] Space, Sherlock, sapphic - these are the words that sold me on wanting to read The Mimicking of Known Successes by Malka Older. So of course I said yes to a copy from @torbooks for review 🙏 I plan to pick this up after I finish my current read!
[•_•[] I once again have received free books from Workman Publishing, and let me tell you, that new paint by sticker couldn't have come at a better time. My remaing sticker art is still packed away after the move and I love working on these while watching TV or something. Very much looking forward to the novel and shorts collection as well!