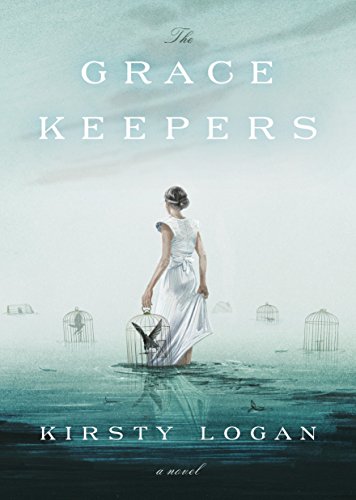 The Gracekeepers
By Kirsty Logan

From the back of the book: As a gracekeeper, Callanish administers shoreside burials, laying the dead to their final resting place deep in the depths of the ocean. Alone on her island, she has exiled herself to a life of tending watery graves as penance for a long-ago mistake that still haunts her. Meanwhile, North works as a circus performer with the Excalibur, a floating troupe of acrobats, clowns, dancers and trainers who sail from one archipelago to the next, entertaining in exchange for sustenance. In a world divided between those inhabiting the mainland (“landlockers”) and those who float on the sea (“damplings”), loneliness has become a way of life for North and Callanish, until a sudden storm offshore brings change to both  their lives – offering them a new understanding of the world they live in and the consequences of the past while restoring hope in an unexpected future.

What I liked:
I thoroughly enjoyed this book and I’m going to try to write a coherent review and not just gush and say “excellent,” “wonderful” and “fantastic” a lot, but I can’t promise anything. This book was excellent, wonderful and fantastic!

But seriously, where do I begin? I had a hunch I would enjoy this book when I requested it, and from page one I was immersed in the strange and wonderful mysterious world Logan created. The dynamic between the world of damplings and landlockers was an interesting world – for the most part people wanted to be on one side or the other, there’s no middle ground like we have today. Rather than working together, both sides seem to just exist, preferring the other would keep their distance.

The characters were complex – Callanish and North were my favorites, and the majority of the chapters were told from their perspectives, but other characters do get their chance to shine, and everyone felt well-rounded. There was no central villain, but characters who all had different desires and who were struggling to achieve them.

I also loved the floating circus, and while the acts and actors weren’t remotely similar to the ones in The Night Circus, it was reminiscent of that and had the same otherworldly atmosphere – it was a circus I’d like to attend. The plot moved along at a nice pace and Logan skillfully shifted between the character perspectives to keep it fresh.

I can’t help but think this book is some sort of fantastic well-developed prequel to the universe in Waterworld. I realize that may sound somewhat negative depending on your feelings on that movie (personally I think it’s an awful movie, but I watch it whenever it’s on), but hear me out. In The Gracekeepers, land is sparse, but not gone, and there are human-mermaid hybrids that are starting to emerge into society here and there. Cue Waterworld, however many years later, and now the land is incredibly rare, but maybe these merhumans are not so rare? I don’t know, I might be stretching this connection, but this is a good thing in my book.

The chapter illustrations are fabulous too:

What I didn’t like:
I’m not saying this book is perfect, but I can’t think of any complaints. Honestly I, just dove right into this book (no horrible pun intended) and couldn’t get enough.

I had an excellent time reading this book I would not object to more of this world from Logan, or really anything else by her, because I devoured this book in two days and was left wanting more. I have confidence that whatever she writes next will have me interested! If you’re interested in fantasy with a vague folk-tale element, this book is for you.

6 thoughts on “Book Review: The Gracekeepers”