I went on a little comic binge via NetGalley and just wanted to share my thoughts.

I received these books for free from NetGalley in exchange for an honest review. This does not affect my opinions of the books or the content of my reviews. All opinions in this post are my own. 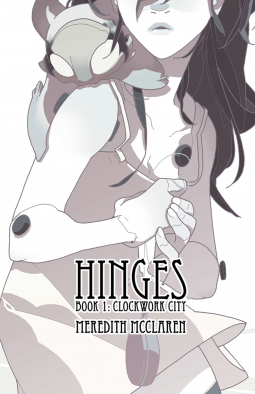 From NetGalley: Hinges is about a doll named Orio and her troubling companion Bauble. New to the city of Cobble, Orio must depend on help where ever she can find it, but her assigned familiar Bauble has other interests. And as the two explore the walls of their city, they find that they are not the only new arrivals. In a place that runs like clockwork, it only takes a little disruption to upend a city.

I loved this so much! I desperately need more volumes, right now! Lucky for me, there are more issues available online on Meredith’s blog! You can be sure I’ll be catching up over the next few days. I lover her art style and while the text is very minimal in this comic, it’s effective and so is the imagery. This story seems well suited to a Miyazaki film or something. I need to know more about this clockwork world and I definitely see myself owning some volumes in the future (maybe I’ll hold out for some special editions). My only critique is that at times, it was hard to tell what was going on in some of the more action-based scenes. 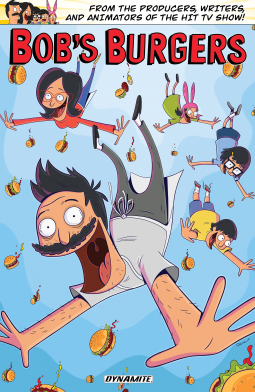 This comic was cute. Honestly, I expected a little more in the way of a story – more like each issue would be it’s own story, similar to the way the Adventure Time comics are done. But each issue had a little segment dedicated to each family member. Being a huge fan of the show, it was easy for me to hear their voices in my head and I chuckled more than once. My favorite segments were Tina’s Erotic Friend Fiction and I would absolutely purchase a whole volume dedicated to her works. I also really enjoyed the various cover art throughout the book. I think fans of the show will appreciate this. 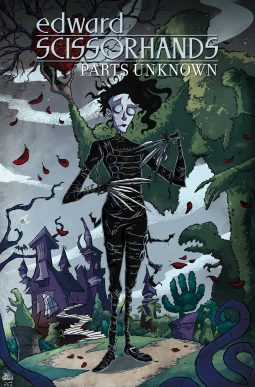 From NetGalley: An all-new adventure revisiting Edward Scissorhands’ two decades after the end of the fan-favorite movie! In a castle just outside a sleepy suburban town, a brilliant inventor created Edward Scissorhands…but left him tragically unfinished. Two generations of exile have left Edward digging through abandoned experiments, but once he wakes up a creature left buried, he discovers he isn’t the only one missing a vital piece. As Edward tries to fix a grave mistake, he comes face-to-face with a teenage girl who was sure he was only myth… despite the stories her grandmother told her about the man she could never touch.

I. Love. This. The art style is stylized and gothic, in the vein of the beloved Beetlejuice cartoon I grew up with. It’s very Tim Burton-esque and I immediately wanted to see this as an animated or claymation film. The story is a little dark, following Kim’s granddaughter as she meets Edward and another creation, proving that the stories her grandmother used to tell her were true. Edward Scissorhands is not one of my favorite films and I didn’t realize I was interested in the aftermath of the film until I saw this comic existed. Now I’m ready for more! Fans of the film should certainly check this out – and even if you’re not a hardcore fan, give it a try and like me, you may find yourself pleasantly surprised and very interested in this new storyline.