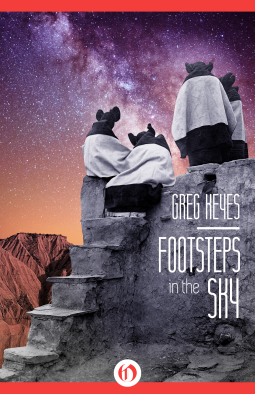 Footsteps in the Sky
By Greg Keyes

In a nutshell, the Hopi people have been terraforming a planet for generations, with the understanding that their future generations will inhabit the planet when it’s ready. In reality their sponsors, known as the Reed, plan to take control of the planet for the people of Earth to resettle. Unbeknownst to both groups, there are aliens in the sky – the original beings who first made the planet eligible for terraforming – who may decide to wipe the planet clean unless they can be persuaded the humans deserve to keep it.

This book sounded interesting to me, and it was something that NetGalley auto approved me for, so I gave it a shot. Sadly, it wasn’t my cup of tea. The writing and the plot weren’t bad, I just wasn’t interested – nothing about the story or the characters really gripped me; it felt uninspired. I did think the Native American spin on what could be considered a standard sci-fi plot was interesting, but I didn’t ever feel immersed. I ended up just plodding through this book because I did want to find out what happened, but mostly I was bored.  Sadly, I don’t have much else to say about the book. There were no glaring clichés or annoying characters that made me want to rant, but neither can I think of anything really praiseworthy. I personally wouldn’t recommend it, but if you’re interested in hard sci-fi with a Native American twist, this might be your cup of tea.

1 thought on “Book Review: Footsteps in the Sky”