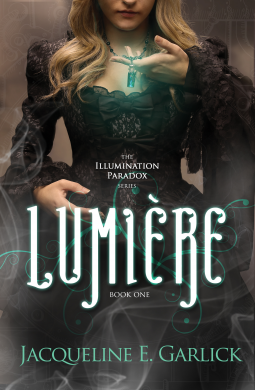 I received this book for free from Net Galley in exchange for an honest review. This does not affect my opinion of the book or the content of my review. All opinions in this post are my own.

From Amazon: Seventeen-year-old Eyelet Elsworth has only one hope left: finding her late father’s most prized invention, the Illuminator. It’s been missing since the day of the mysterious flash—a day that saw the sun wiped out forever over England. But living in darkness is nothing new to Eyelet. She’s hidden her secret affliction all of her life—a life that would be in danger if superstitious townspeople ever guessed the truth. And after her mother is accused and executed for a crime that she didn’t commit, the now-orphaned Eyelet has no choice but to track down the machine that was created with the sole purpose of being her cure. Alone and on the run, she finally discovers the Illuminator—only to see a young man hauling it off. Determined to follow the thief and recover the machine, she ventures into the deepest, darkest, most dangerous part of her twisted world.

Rather than write my own blurb for this book, I wanted to post what initially interested me and prompted me to request this book on Netgalley. Now, having actually read the book, I can firmly say the cover design (which I do think is fabulous) is the best part of this book. That, and the fact that I’m done with it and never have to read about these stupid characters again. First off, what kind of a name is Eyelet!? All I could think of was holes in cloth, for threading rope and whatnot. I obviously didn’t absorb her name when I first read the blurb prior to requesting the book, because when I started reading I was shocked at how ridiculous it was. This oddball name was followed by others – Urlick (which I decided to mentally pronounce as “Yur-lick” to keep things fun), Flossie and Professor Smrt. Yes, SMRT, no vowels necessary! I’m not sure what the thought process was behind that last one and because I don’t think the book could be any more ridiculous, I started mentally pouncing that as “Ess-em-arr-tee” rather than “smart” without the “a.”

I have many issues with this book, but I’ll do my best not to rant. In a nutshell, this book was full of confusing imagery and half-developed ideas, which led to the feeling that Garlick was making up the rules as she went, to suit each situation, rather than establishing solid rules and boundaries for the world she created. I thought this would be a post-apocalyptic steampunk adventure and while I think Garlick did focus on the steampunk elements, everything else seemed to fall to the wayside. The “mysterious flash” and following blackout described in the blurb was the most disappointing element. One would think, with there no longer being any sunlight in England, that there would be catastrophic consequences and that Eyelet’s daily life would be greatly impacted by this factor. But no.  I think it was mentioned maybe once, that the sun didn’t shine and that she used something called a “bumbershoot” (never came close to figuring out what that was) for light, then it was never discussed again.

About halfway through the book there are also magical elements, such as demons made of vapors, ravens that can shape-change and a motorcycle made of bones with leather wings. His name is Bertie, if you were wondering, and he is “alive,” in that he can whimper, chortle, shudder, whine and sigh when you talk to him. Perhaps Bertie (what a terrible name for a potentially awesome character) could have been developed into something fantastic, but there was no mention of how he came to be created or what made him sentient. Like Bertie, the magic system was never really addressed, so it wasn’t clear what the rules where and who possessed magic or how it could be used. It felt like a convenient plot device to help our heroine when needed, only to be discarded moments later when it was no longer of use.

The characters are cardboard cutouts. Eyelet is your traditional beautiful, smart, witty, headstrong, somewhat clumsy heroine. In fact, she appears to be the only good-looking person in the world. There’s a man with no arms, a girl without a tongue, a rival with a harelip and a big hairy mole on her face and her semi-albino lover. She does suffer from seizures (which she insufferably refers to as “the silver”) which was intriguing and unique, but I don’t think Garlick pushed that envelope far enough. Urlick is an albino…with black hair…and a wine stain birthmark (on his face, described several times as a snake’s open mouth, ready to strike) and a permanent hand-shaped bruise on his throat. Eyelet eventually falls for him, as anyone with half a brain would know was coming, and their “relationship” felt rushed even by YA standards.

With quotes like “My heart rattles like a bag full of snakes,” and a scene where Eyelet shakes Flossie’s hand and can smell “weakness and a lack of a warm heart,” (WHAT.EVEN.) it’s no wonder I wasn’t impressed. I could probably dissect this book into a million, horrible, disjointed little parts, but this review is already longer than I planned. Sadly it’s just easier for me to rant about a bad book than praise a wonderful one. I really can’t say I’d recommend this to anyone.