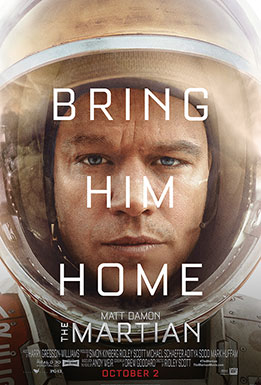 Movie adaptations of books can be a double-edged sword to book lovers. Of course, I want to see my favorite books made into movies – good ones though! More often than not, despite trying to keep my expectations low, I usually leave the theater disappointed.

Most recently, I was feeling optimistic about The Martian. I think Matt Damon was an excellent choice for Mark Watney and I figured, based on the previews, that this could be a decent movie. Unfortunately I ended up bored. Granted, it’s hard to be impartial when I’ve already read the book, and yes, I knew how it would end. However, there were some pivotal scenes in the book that were either left out of the movie, or had all the drama sucked out of them. During the whole movie, it felt like nothing was really at stake. I seem to be in the minority with my opinion on this movie however – though I’ve yet to talk to anyone else who’s read the book as well. If you’ve read The Martian and seen the movie, what did you think of the two?

I might be a harsh critic, but I don’t think there’s anything wrong with wanting quality and authenticity in movie adaptations of books. I’m tired of important scenes being left out so scenes that aren’t in the books can eat up the screen time instead. Most times I avoid book adaptations to spare myself the frustration. I made the mistake of watching the first Hobbit movie…what a disaster that was! I also wasn’t impressed with Horns, though it wasn’t for lack of trying on the actor’s parts – once again all the feeling seemed to have been sucked out of the script.

But I’m not impossible to please! I’ve been satisfied with the Hunger Games films, though they’re probably the most recent book adaptations I’ve seen and actually enjoyed. I also liked the movie versions of Howl’s Moving Castle and Memoirs of A Geisha. While they both vary from the books, it was done in a way that didn’t bother me. I tend to think of them as separate entities and it makes them easier to enjoy.

Then in the middle of that spectrum lies Beautiful Creatures. I’ll admit…I’ll sit through almost anything starring Jeremy Irons. I saw the movie first and thought that the storyline had potential. The acting wasn’t great, nor was the writing, but I enjoy tales about witches and figured the book would be ten times better. So I picked up book one and was even more disappointed with it than I was with the movie.

So tell me, do you normally give movie adaptations of books a chance? Are they any you’d recommend?