A sentimental longing or wistful affection for the past, typically for a period or place with happy personal associations.

Goosebumps: Small bumps on your skin that are caused by cold, fear, or a sudden feeling of excitement.

As a child, reading R.L. Stine’s Goosebumps novels certainly gave me feelings of fear and excitement. I have no idea what the first Goosebumps novel I read was, but I recall having a pretty sizeable collection. I ate them up – creepy stories about regular kids, around my age, finding all sorts of horrible and magical misadventures. But I was safe at home, living through the adventures without having to run from demonic scarecrows or colorful beasts that wanted to play deadly games.

The internet tells me that in the span of 5 years, 62 Goosebumps books were published, the first being Welcome to the Dead House. I’m not sure how many of the original series I read, but I’m willing to be it was the majority of them.

His books even inspired me to create some fan art. I recall drawing several of the covers (the one with the scarecrow and the one with the snowman come to mind), but this is the only one I still have. 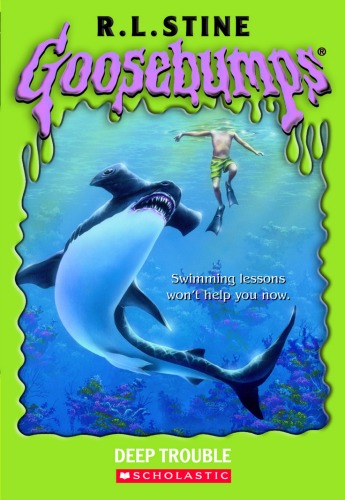 I’m not sure how old I was when I drew this, but honestly, at 28, I’m not sure I could draw a better hammerhead, or a better swimming boy. Not quite as creepy as the original, but I’m still pretty proud. I also loved to write stories as a child and many of them were pretty grim – I can’t help but think I was inspired by Stine.

There was a TV show as well, but I have to say, I never watched it. I was a fan of Are You Afraid of the Dark? and didn’t need a second creepy show. And of course, they recently made a movie about R.L. Stine and his creepy creations, but I haven’t given the film a chance either.

The internet (via Stine’s Twitter account) also tells me that Stine would come up with a book title before devising the plot of a book. I can especially imagine that with Say Cheese and Die – it sounds like something catchy someone thought up and then built a book around. He also says he started writing at the age of nine!

I’d love to dive into the Goosebumps series again and relive the cheesy fun from my childhood. Alas, I don’t own any of the originals anymore, but I do still have a couple books from the Fear Street series (geared more towards teens) and every few years I slip back into their familiar pages and I still enjoy both books.

Were you ever a fan of the Goosebumps series or any of the spin-offs? I recall a few choose your own adventure type books as well…