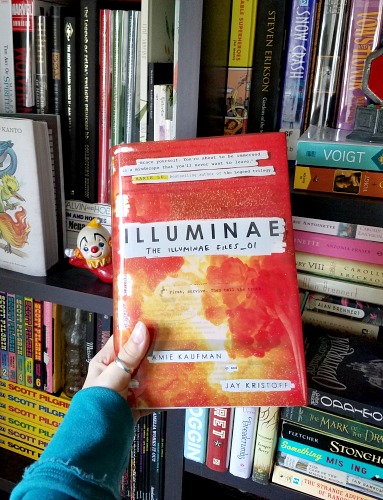 When Kady and Ezra’s home planet is brutally attacked by a competitor in the mining industry, they are lucky to escape the planet alive when a nearby group of military ships responds to their distress call. The small fleet of three ships houses the refugees and they’re fleeing for their lives as one of the enemy ships pursues them. Any useful refugees are quickly conscripted as they try to outrun the enemy, but after a tragic incident, it becomes clear that all is not well in their fleet. Kady, expert hacker, works to find out the truth as Ezra trains to become a fighter pilot. The secrets they uncover are more deadly than the enemy ship that’s hot on their trail.

Ok, my blurb is shit, but there’s a lot going down in this book and it’s hard to sum up without spoiling anything – though why I even tried to sum up Illuminae is beyond me because even if you haven’t read this, I’m pretty sure you’ve heard of it and at least have some idea what it’s about. I should have just said, crazy shit goes down in space and is revealed to readers through found documents.

I bought this book a while ago, primarily because it’s sci-fi and the design was too cool to pass up. I was a little wary of the YA aspect, because, let’s face it, more often than not I’m disappointed or downright pissed off by much of the YA I read. I’m not trying to trash the genre and I always keep my eye out for YA reads that I think I’ll enjoy, but it’s not my favorite group. Anyway, this book is rad looking – you might recall I did a Judging post on it a while back. I’ve wanted to read it for quite some time, but without the recent read-a-thon I participated in, I’m honestly not sure when I would have made time for this book.

I’m so glad I did though! This was a fast-paced story and despite the seemingly impersonal, or perhaps, less detailed aspect of government documents, conversation transcripts, journal entries and IM conversations, I was fully immersed in this book and was easily able to picture action scenes in my head. I feel I have a good idea of who Kady and Ezra are and what they stand for and I was hooked from page one.

I also liked that there was no love triangle! Kady and Ezra have a pre-established relationship, so there was no love at first sight, soulmate, which boy should I choose crap that usually has me wanting to throw a book out the window.

There’s even some crazy, overly-poetic artificial intelligence in this book – I love sci-fi where there’s the question of whether the crew controls the ship or the other way around, and Illuminae delivered.

There are several twists in this book and once or twice I found myself talking out loud about what happened. I did have my suspicions about the ending, that proved correct, but that didn’t lessen the excitement for me.

Overall the format flowed like a regular novel for me and I am hoping to read the next book early next year! For the first time in quite a while, I can say I highly recommend a YA novel and I’m so pleased!

You can visit Jay and Amie’s websites.