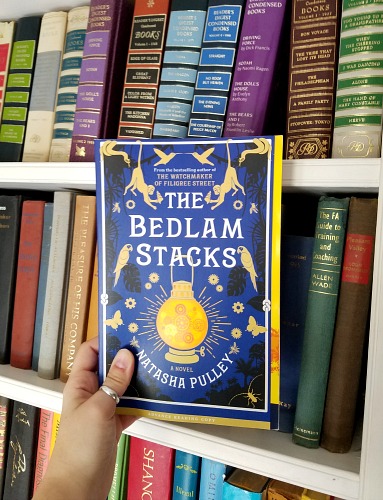 The Bedlam Stacks
By Natasha Pulley

Merrick Tremayne is an ex-smuggler trapped with his stodgy brother in their old family home as it literally falls apart around them. His brother is ready to ship Merrick off to a small town and force him into being a pastor when Merrick’s old friend and army buddy, Clem shows up. Clem proposes Merrick join him and his wife on a risky quinine-stealing expedition. Merrick’s old leg wound has handicapped him some, but his knowledge of plants is indispensable. Merrick soon finds the expedition is anything but routine as they camp amongst locals who won’t cross a salt line in the woods for fear of what lurks in the woods beyond and living statues.

I loooooved Pulley’s first book, The Watchmaker of Filigree Street, so I practically jumped for joy when Bloomsbury asked me if I’d like a copy of The Bedlam Stacks to review.

Here’s another book that I find myself struggling to describe (“Like basically every book you read?” you think to yourself) and it’s because until about the last fifth of the book, I had no clue what the hell was going on. This is the good kind of clueless though. Not the kind that frustrates you because you don’t have enough information or the writing doesn’t make sense. This book has a very surreal vibe and it took me a while to get used to the atmosphere. Because of that, I was like ??!? but still very interested while reading.

I did fail at the mental imagery though. Bedlam, the mystical little clifftop town Merrick finds himself in, is built on some sort of salt cliffs that have turned to glass? And there’s a forest (that I totally pictured as a rainforest but I’m pretty sure that’s wrong because it was like always cold and sometimes snowing) with these trees that are so light and airy that they can float and also they explode in a fire? And there are moving statues that are much more than they seem (no question marks here because I actually understood that part). And also there’s a sort of glowing pollen everywhere that can be used in lamps and also leaves light trails when you walk? If any of this sounds even remotely interesting to you, you’ll probably like this book.

Yes, I’m aware that my weird questions don’t make a review. Anyway, that’s some of what goes on in this book and I really wasn’t picturing much in the way of a setting. However, I was absorbed in the characters, especially Merrick and Raphael, his guide through Bedlam and to the quinine trees. I’ve already learned that Pulley is a master at crafting characters, especially male ones. Bedlam is yet another book that is heavily character-driven and normally that’s not what I prefer to read, but I will eat up anything this woman writes. There’s even a little cameo from one of the characters from Watchmaker that I think strengthens their backstory and serves as a nice reminder of Pulley’s other novel for those of us who friggen love it.

I loved the weird, mystical feel of the book and Merrick’s sense of humor and sadness. I loved his conversations with Raphael. I loved the final chapters when things got intense and the magic was more prevalent. The ending was totally unsatisfactory and realistic and I don’t think it could have ended any other way but damnit, I wanted it to!

If you like heavy character development, male relationships, the mid-1800s, surreal magic and the feeling of desperately wanting two people to just be together forever, then I highly suggest both Watchmaker and Bedlam. I can’t say I loved Bedlam as much as I loved Watchmaker (it’s not far behind though!), but once more these characters slowly curled their way around my heart and then at the end of the book squeezed the hell out of it. I will absolutely be buying the hardcover once it releases because this book is bound to be as beautiful as Watchmaker if the design of this ARC is anything to go by. I’m fully ready for whatever she writes next and NEED IT ASAP.

I received this book for free from the publisher and NetGalley in exchange for an honest review. This does not affect my opinion of the book or the content of my review. All opinions in this post are my own.