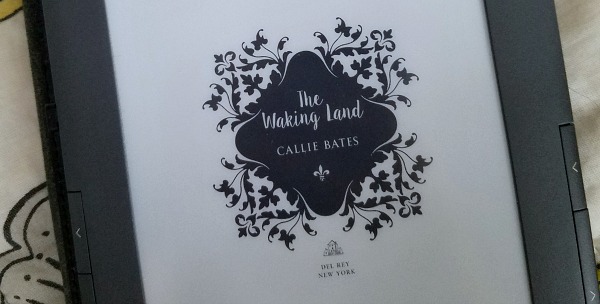 The Waking Land
By Callie Bates

Elanna has been raised by a king who took her hostage when she was a child and has grown to love this king as her father. When he dies suddenly, the court turns its eyes to her, remembering that her father once tried to start a revolution all those years ago. Elanna finds herself on the run, convicted of murder, and swept up with her father’s people once more, all but strangers to her now. They wish to use her and the earth magic she has done her best to hide and deny to further their revolution and Elanna finds herself divided between loyalty to the land she once called home and her true family.

I missed the part where it was YA and had I known that I still would have given it a chance, but I would have been more prepared for the constant physical descriptions of the characters and their clothing and how handsome that one guy was. Instead, I was caught off guard, wondering why this book wouldn’t shut the hell up about how hot this one guy was and how bewildered Our Heroine was that someone so blindingly handsome would pay even an iota of attention to her. I wish she had been struck blind by his good looks so she would STOP TALKING ABOUT THEM.

Actually, the first clue I had that this book was YA was that magical line where the character said within the first handful of pages: “I breathed out a breath I didn’t know I was holding.” Damnit! She even repeats the sentiment later by stating: “I realize I’m holding my breath.” Girl, would you just breathe normally, please!?

Writers one and all, please stop putting some variation of that line in your books! I beg you!

Anyway, once I realized I was reading a YA fantasy books, things started to go downhill fast. Elanna has some cool magical powers wherein she can make plants grow and move and maybe do other stuff, but, I didn’t get far enough to find out. I enjoyed hearing about her life in the palace (though perhaps she would have been a less annoying character if the book wasn’t told in first person and the read privy to her every pointless thought) Once she’s convicted of murdering her foster father, the king, and she meets the heart-poundingly, breath-takingly, lip-bitingly, godlike, handsome Jahan, I started to lose interest because her world starts to revolve around his handsome jackass.

Oh, and we also find out 20% into the book that his name is pronounced Yah-han, not Jah-han, but by then it was too late for me to change my mental pronunciation.

So Elanna has these cool powers she’s been trying to hide, but rather than use them, she’s busy mooning over JAH-han. The second he comes on the scene, really, she’s gabbing about how super-hot she is and how she’s dressed as a boy (Gasp! How drab!) Which, by the way, I swear the start of the book mentions her boy clothes and how she doesn’t actually pass for a boy, they’re just more comfortable, but then after that she’s constantly worried she’ll be mistaken for a boy in the presence of good looking people and even is mistaken for a boy at least once. I, however, was too lazy to go back and look this up, so I can’t be certain.

When Elanna wasn’t pausing amid fleeing for her very life or thoughts of how she’s just lost all the family and friends she’s ever known to think about the hunky Jahan, she was painstakingly describing her group’s boring travel details or random politics about a world I didn’t care about. For someone with magical powers, she didn’t use them enough for me to maintain interest. I wanted to know more about the magic system – oh, Jahan has undefined mystical powers as well – and sadly, when I wasn’t bored to death I was frustrated.

I felt so beaten about the head with Jahan’s hotness that I wish I’d actually been knocked unconscious so then I wouldn’t have to hear about it again. I finally had to abandon this book because life is too short to read books I don’t enjoy.

But hey, if the handsomest dude to ever handsome in YA and magic (I hope there’s more of it in the latter half of the book) are things that interest you, you might enjoy this!