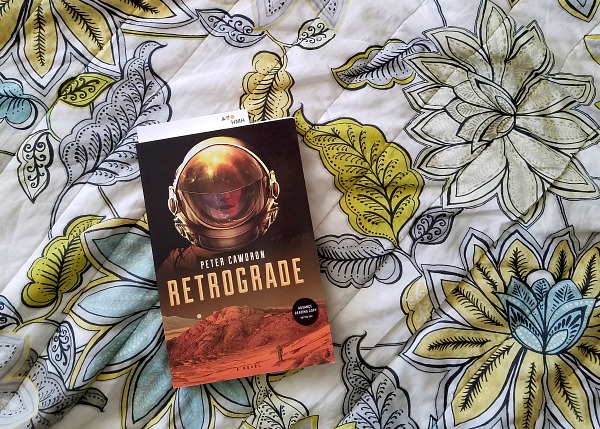 Liz is a scientist living in the U.S. module of an international station on Mars when the group gets the shocking news that several nuclear bombs have been dropped on various major cities around the world. With limited information being sent to the station and no support from Earth, rumors begin to spread and distrust rises between the different modules. Allegiances are put to the test and Liz struggles to keep members of each module from shutting out everyone else. When supplies start disappearing and systems breaking down, everyone in the station must band together to figure out what is happening before their lives are put in peril.

I have mixed feelings about this book and find it hard to talk about.

Let me start by talking about the parts I enjoyed. First, the general plot; I’ve read plenty of sci-fi, but I’ve never read a scenario where the people on a space station find themselves imperiled due to a war on Earth. This got me thinking about how scary (well, most sci-fi books set in space scare me because I’d be too scared to go into space) it would be to realize that your survival on another planet depends on a planet that’s now wrecked by a war and may never be able to send you further support. The space station certainly seems well-equipped, but I didn’t get the impression that the station could be self-sufficient if Earth was permanently incapable of sending them future supply pods. It certainly adds tension to an already dangerous situation, on top of the strife and misery the inhabitants experience after finding out everyone they know on Earth might be dead.

The other part I enjoyed was the twist…that I feel like I can’t talk about? I didn’t see if coming and if you might not see it coming either, I don’t want to give it away. So, it was unexpected (ok, duh, I just said that) and it added a little spice to a story that was otherwise boring me. I mean, I wanted to be interested in what was going to happen to these people who are possibly stranded on Mars due to a nuclear war on Earth, but, for reasons I’ll explain in a moment, I wasn’t. When some shit hit the fan and I found out why my interest was renewed in the plot, at least.

My main problem with this book is Liz – the first person narration prevented me from getting to know any of the other characters, except through Liz’s limited, and extremely repetitive, observations and I found Liz bland.

I’ve read plenty of novels written in first person; I know many people dislike it, but I typically don’t mind it (sometimes I don’t even really notice it). In this context, however, I never got to know any of the characters except Liz and even Liz’s way of talking about her own life and experiences didn’t feel like I was getting to know her so much as it felt like she was just citing random facts about herself. As a result, when other characters experienced something traumatic or emotionally meaningful, I felt nothing.

Liz is also extremely repetitive. One of the first things that started to annoy me was her constant talk about how Harrison, one of the US mod leaders and also her ex-boyfriend, swears often. At first, I chalked it up to Liz thinking someone swearing is a character trait or description we need to know about (whereas he could just swear a lot in his dialogue and I’d get the point without it needing to be explained to me). Then she keeps talking about it. Good Old Harrison, can’t talk without swearing. That’s Harrison, swearing away, he does it a lot. Harrison swears, he must like the colorful language, unlike the rest of us. Man, nobody swears like Harrison and it sounds totally new and different when he does it. Golly, there’s Harrison, swearing again, isn’t it neat?

This is a theme with Liz – constant repetition. Her thoughts on the war were one-note and repeated throughout the book. Essentially any observation she made was bound to be repeated and every scenario over-explained. I didn’t feel like I was given a chance to figure anything out myself. For example:

“Hit me with spray,” Connor says.
“I’ll hit you if you don’t do as you’re told,” Anna says sternly, playing on his words.

I get it – you don’t have to tell me Anna was playing on Connor’s words because I read what she said and it’s clearly a play on words. Most of the dialogue is similarly flat.

While I don’t consider Retrograde a bad book, I’m torn on whether or not I’d recommend it. I did like the plot, but I never felt for any of the characters because of Liz’s lackluster point of view. It is a relatively quick read though and if you’re looking for a slightly different take on the ‘life in a space station’ scenario, this one might be worth borrowing from the library.

I won this book from a giveaway HMH Books hosted on Instagram.This does not affect my opinion of the book or the content of my review. All opinions in this post are my own.