I received this book for free from Parvus Press in exchange for an honest review.

Captain Talis took a salvage job in hopes that the payout would give her and the crew enough to fix up her airship and have some spare coin to splurge on food. The ring she retrieves turns out to be valuable to several groups, including the strange aliens who have come to research her home planet of Peridot, the religious cult her ex-boyfriend belongs to, and the gods of Peridot themselves. Talis and her crew find themselves in the middle of a war between the living gods and the groups who want to murder them and steal their powers.

Guys. Guys. Do you like airships, steampunk, aliens, sky pirates, cults and otherworldly beings? Then probably you should read this book because it’s a lot of fun.

I think mixing aliens, technology (both of the “modern” and steampunk variety) and magic is a tricky recipe to get right and Theodore succeeded.

From what I can tell, the world of Peridot is a fragmented planet, held together with breathable air thanks to the power of five gods. After the Cataclysm, the gods managed to save the planet and create their own unique races to populate it. These races, named for their creators, populate the islands of Peridot and navigate by way of airships. Newly arrived aliens, the Yu’Nyun, have come to explore the planet and research life on Peridot. Their ships are far more advanced than any of the fleets of the planet, but the race seems peaceful, only interested in history and obscure artifacts.

I did struggle to imagine Peridot, but I think I got the gist of it. Most of the book takes place on airships anyway, so that was much easier to picture. Amid airships and pre-Cataclysm ‘tronics, there are hints of the alchemical arts, as well as the power the gods possess. All these elements combined to make an interesting world.

Enter Talis and her small crew, Sophie, Tisker and Dug. The small crew allowed readers to get a good sense of each character and their history throughout the story, rather than info-dumping or too many underdeveloped characters. I enjoyed following Talis as she struggled, sometimes due to her own actions, because she was trying to find a way to provide for herself and her crew. Her motivations were clear and understandable – even amidst the chaos later in the book, she’s still trying to find a way to do right by her crew, who really is her family.

Theodore created a detailed world and I think she found the right balance between showing enough and leaving more to be revealed in the next books. We see a great deal of one of the gods, Onaya Bone, including some of her powers and a look into her temple. I loved that the gods are living beings, present (somewhat anyway) in the lives of those they created – they weren’t just an abstract idea or something long gone. We’re also given information on some of the races; there’s Cutter folk who are the main power in Peridot and come across as your garden variety humans, though many have prayerlocks (I thought of them as dreadlocks) used to invoke the blessing of their god and Bone folk who have feathers mixed in with their hair and seem to be built to be warriors.

We do get a bit about the Vein who are blind, have four arms and are possibly psychic, the Breakers who seem to be built sort of like walrus, and the Rakkar who have chitin, armor-like plates on their skin. I hope that Theodore delves more into the lives of those races in her next book.

Oh, and how could I forget to mention BLOOD DRINKING FLYING SKYMERMS! These are my favorite creatures ever! They live inside storms in the sky and prey on ships who aren’t protected and I need more of them in my life, stat! Can someone make some fan art of that?

Theodore also helpfully provides a glossary in the back that gives more details about locations, characters, the gods and their races. I found the information on the five races (and the aliens) to be especially helpful. Had I known this existed when I started reading, I would have referenced it. Instead I tried to take notes on my phone every time new info was given about a specific race.

My issues with the book are small and mostly nitpicky. As I mentioned, I did have trouble imagining the physical geography of the planet, but it was a visual (well, mental) issue and it didn’t really affect the story for me. I also noticed a few phrases that were used in back to back sentences, like “a testament to” and “little more than.” They pulled me out of the story for a moment because of the repetition. I had a similar issue with fragmented sentences. I can’t quite explain, but sometimes I would have to go back and reread a sentence or two prior because I was confused about who or what the subject of the sentence was. Again, not a huge deal. One final gripe is that Theodore describes the smell of a room with scenes of “heavy spices, sand and feathers.” What even? I’ll give her the benefit of the doubt and let sand represent heat (even though you really can’t smell heat, I think I know what she was going for) but what on earth to feathers smell like? And if the spices are heavy would you even smell the sand and feathers?

Again, these are little issues and didn’t deter me from truly enjoying this book. I was fully immersed in the world, I cared about the characters and I’m eager for the next books! Not to mention, the cover is lovely and there are some drawings inside by the author! I highly recommend if you’re looking for a magical, high-tech, steampunk adventure. Skymerms, guys – skymerms! 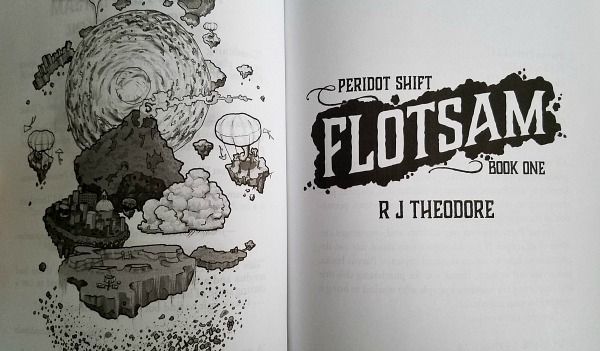 [·_·[] just your local normal cool girl dressed like a hippy witch and looking intellectual by reading ~Shakespeare~ in a public place.
[·_·[] Now that it's halfway through September (hurk), I'll tell you what I read in August!
[·_·[] instead of reading books and telling you what I think of them, I bought some instead 🤣