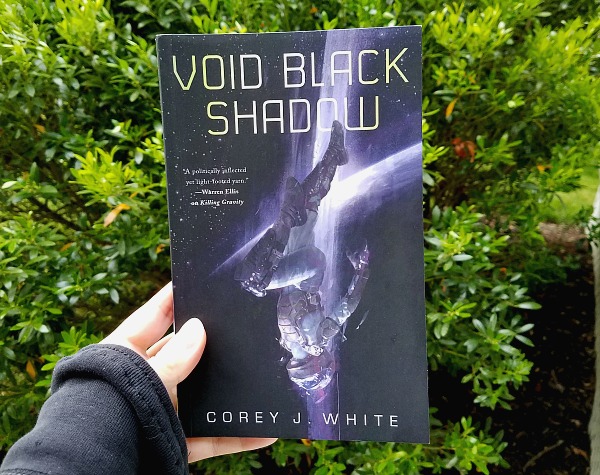 Mars and her crew, Squid, Trix, Ocho and newly adopted Pale, set off to a remote corner of the galaxy to save their friend Mookie from a prison planet. Once again, Mars finds herself facing off against the forces of MEPHISTO, the evil corporation that ruled her childhood and manipulated her until she became the powerful weapon she is now. Bent on vengeance, Mars will stop at nothing to save Mookie, especially since it’s her fault he’s been caught.

Not only was this a fantastic follow-up to Killing Gravity, but this book exceeded my expectations and the ending really threw me for a loop!

Mars – lovable, smart-mouthed, powerful, thieving, murderous Mars – is back and I’m in love. I’m a fan of fucked-up antiheroes, so it didn’t take long for Mars to worm her way into my heart. She makes rash decisions, has incredible telekinetic powers that she uses to murder hoards of people, but she’s got some morals in there and she’s stuck by her new friends because it’s the right thing to do but also because inside she’s secretly really lonely.

You need to read the first book before you read this one, because the plot picks up where the first leaves off. The gang needs to save Mookie and he’s been banished to a prison planet, due to the fact that he went AWOL years before – but he was only caught because Mars was taken in by Squid and his crew. Mars harbors a lot of guilt over that and decides the best way to break Mookie out of prison is to land herself in a cell.

The plot kept up a good pace and I loved watching (er, mentally visualizing) Mars friggen destroy everything around her. We meet a few more members of MEPHISTO to hate and get a look at another planet. The ending also kicked my ass. I kept trying to guess how Mars would fix everything and I’ll tell you right now, I was wrong, dead wrong. This book took some hard turns and they felt natural and right (well, in an awful way for the characters.)

If you liked the first book and you like prison breaks, I think you’ll like this book. If you’re interested in prison breaks and telekinetic space witches, then you should check out the series. I’m so upset I have to wait for November for more!

[·_·[] I felt like posting, but not like formulating any sort of mini review for the books I've read. So, here's another picture of Phoenix Extravagant. 🤷🏻
[·_·[] Today I bring you my February wrap up.
[·_·[] if you're interested in the general lore and medicinal properties of common plants, then j recommend Folk Magic and Healing from @liminal_11. They sent this to me in exchange for my honest review and I found this to be a lovely little book.