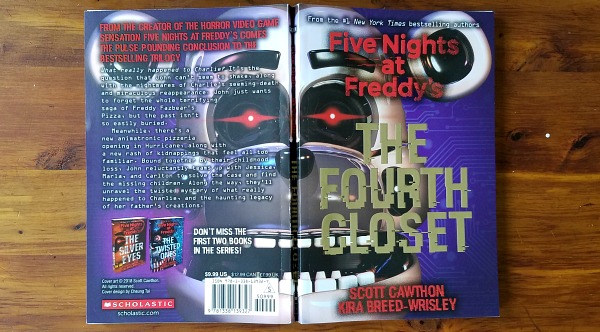 Ok gang, this is it – the last leg of this torturous Freddy’s journey. If you like ranting, please check out my ravings on book 1 and book 2 first. Otherwise, continue on to the final review of this dumpster fire of a series.

The existence of The Fourth Closet took me by surprise. Amazon suggested it (oh, they know me so well) and I accidentally clicked on the one-click option for pre-order instead of adding it to my cart for later. I decided not to cancel because I knew I was going to read this shit anyway.

After the events of the Twisted Ones, this book starts from John’s perspective. He’s cruising through life in a daze about six months after Charlie’s presumed death and miraculous return (complete with a sexy makeover). He doesn’t trust this Charlie and has separated from his friends as a result. Meanwhile, another pizzeria full of creepy animatronics has opened in Hurricane, even though it’s only been 10 years since children went missing and were found murdered. For some reason, the town is willing to give this place a chance, even though the mall they tried to build around the shell of the last one never ended up being developed. Now kids are missing again, surprise, surprise, and the gang reunites to solve the mystery once and for all.

Good old John is our titular character in this book. Finally, we get to see life through his eyes – and it’s just as boring as it ever was! His sole purpose is still to love Charlie, though this time around he does get to be skeptical for a while. Don’t worry, by the halfway mark he’s back to devoted lapdog. There are actually two Charlies in this book, because one wasn’t boring enough. Don’t worry, “evil Charlie” has zero personality too! But at least she shut the fuck up about her sit-ups and she basically always wears red so you know she’s sexy now. Carlton returns with his “jokes” and comments about food at inappropriate times. Jessica is still pretty and popular and dresses nice and Marla returns to run around and care about people. Chief Clay makes a brief appearance and Lamar stayed true to his word about never returning to Hurricane. I think he’s the only character I don’t hate!

I guess we’re supposed to feel bad for John because he’s lonely, lives in a dumpy apartment in a sketchy area and can’t hold down a construction job because he’s constantly zoning out and not a team player. Ever since Charlie returned he had a suspicion that something was off, so he’s torn himself away from his one true love and all their friends to suffer in isolation. Oh also he’s sad because his car is “old and brownish-red something that might have been cool in high school” but is now “just a reminder that he was still a kid who hadn’t moved on, a mark of status that had become a mark of shame within the space of a year.” Because, you know, high school grads who live on their own aren’t cool unless they can magically afford to buy a new car to replace their brownish-red one.

In fact, John is so depressed that he’s taken to walking at night on the side of a busy road where there’s no sidewalk. He likes to edge his way into the road, playing chicken against himself. Don’t worry though, when he gets too far into the road he steps back to safety, though always with “a secret, sinking disappointment in himself that he would do so.” I’m really not sure how readers are supposed to feel about John’s apparent suicidal ideations because it’s never addressed again.

Jessica happens to recognize John while he’s walking one night. She pulls over and begs him to come to a party and start talking to Charlie again, saying his actions are killing Charlie. John wittily adds that Charlie is dead. They have a short dispute about Charlie’s aliveness and authenticity and then John grudgingly agrees to maybe show up at this party. We also find out that the end of book two, with Charlie turning up all sexy at the diner is the very next day after her supposed death via murder robot.

At the party we see why John doesn’t think Charlie is really Charlie. His Charlie is “round-faced, frizzy-haired” and “awkward” and this new version is “taller, thinner, her hair longer and darker.” Maybe John doesn’t realize that people can change their hair and lose weight, especially if it’s been six months since he last saw them. But anyway, it’s been established that Charlie is hot now. The result of the party is that Charlie and John will go on another boring and awkward date – the very staple of these books!

We’re treated to a random interlude about a creepy guy and his assistant performing some sort of experiment. The creepy guy is obviously Afton, or whatever he’s referring to himself as now. He’s back on his bullshit with more creations. We’re also treated to descriptions of the robots in this book, which are apparently the ones from the Sister Location game – so I guess I shouldn’t have pictured those versions in book two. Maybe I was supposed to go with the ones from the game where you’re a kid having nightmares? I don’t know; it makes me dizzy trying to link these books with the games.

Clay and John have a pow-wow because we all know Clay is on board with conspiracies – he wants John to interrogate Charlie on their date. Meanwhile, Charlie breaks into Jessica’s apartment and lurks creepily for a few minutes while Jessica puts away groceries and then senses someone in the house. She says she’s nervous about her date with John and Jessica apparently thinks this is a reasonable excuse for her friend being a complete weirdo.

John and Charlie’s date is nothing we haven’t read before. We do learn that the graves from the end of book one were Sammy and her father’s, though John never saw them to confirm. He tells Charlie one of his theories about her is that she’s actually Sammy, who was a girl all along even though that theory makes zero sense. Charlie randomly asks John if he’s seen her Aunt Jen and explains that she’s missing; she figured she’d ask John even though he and her aunt have never really met. These two are clearly made for each other.

John reports back to Clay, but first, he takes a moment for this gem:

“I wonder if Carlton’s gone back to school, he wondered…”

Clay explains kids are missing again and also seriously offers John his gun when he leaves, so that readers don’t forget what a terrible cop and adult he is. Later that night Clay is attacked, obviously by an evil robot, and laid up in the hospital for the remainder of the book, leaving John to take his place as investigator of mysterious happenings.

Back at home, the head of Theodore, Charlie’s creepy rabbit robot, starts talking and John learns it’s a clue. For some reason, Theodore knows there’s something going on in Silver Reef, which happens to be a deserted mining town. John and Jessica venture out there and happen to find Aunt Jen, who John actually refers to as Aunt Jen when she opens the door, even though she’s not his aunt. Their conversation is stilted and confusing and before anyone finds anything out, John and Jessica are told to hide because someone else is knocking on the door. It’s Charlie! They find a room full of boxes to hide in and John randomly starts opening them while they wait. John just happens to find Charlie in a trunk, she’s curled up and napping, even though I imagine you wouldn’t be able to breathe in a trunk. Neither he nor Jessica consider that issue though. John is ecstatic because he found his Charlie. He knows it’s her because “her brown hair was a mess; her face was round; and she was wearing light gray sweatpants and a sweatshirt.” So now we know, Frumpy Charlie is the “real” Charlie and Hot Charlie is the impersonator.

Speaking of, Hot Charlie is busy murdering her Aunt Jen. The kids are able to hide and make their escape, bringing Frumpy Charlie back to John’s place. They don’t bother to alert anyone to the presence of Jen’s body and John decides to head back to Charlie’s old house for further investigation. Despite practically collapsing six months earlier and maybe being a crime scene, the house hasn’t been torn down or even cordoned off. He takes Ella, another childhood toy of Charlie’s and uses those noise discs from book two to discover she looks like a baby and feels warm and fleshy when the disc is activated. We find out that Hot Charlie is also using a disc to appear human.

John sets up another date with Hot Charlie to avoid suspicion and gather more info. John studies Hot this time around, noting the differences between her and Frumpy are “minute, millimeters or less” and concludes the only way to tell them apart would be “to look at Charlie and her robotic double side by side.” If this is true, I’m wondering why he was suspicious of Hot from the beginning. John’s roped Carlton and Marla and Jessica into helping and Carlton is quickly distracted by Hot Charlie, immediately forgetting the severity of their mission and apparently the abuse he previously suffered at the hands of evil robots. Teen boys, right? Har har. Jessica slapping him was at least somewhat gratifying. Despite not even ordering food, Charlie pays the bill and the date is finally over.

I’ll end part one here before shit really hits the fan, plot-wise. Stay tuned for the ultimate finale of my strange affair with the Freddy’s franchise!