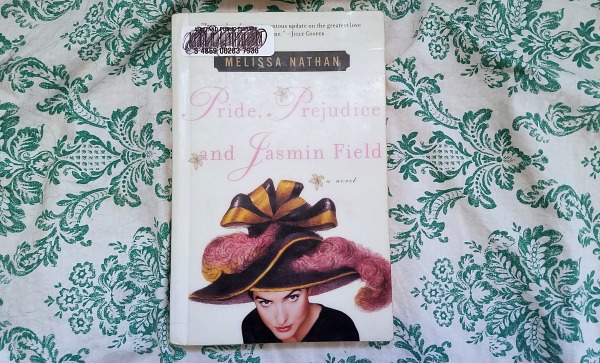 I figured this would be a cute, modern-day Pride and Prejudice retelling and I was right.

Jasmin Field is a journalist for a women’s magazine and after she auditions for a charity production of Price and Prejudice, she finds herself playing the star role of Elizabeth Bennet on stage. Only her Darcy is played by award-winning star and class-act snob, Harry Noble. Jasmin soon finds her own life mirroring the play as Noble infuriates her, her sister falls in love with the man playing Bingley and Jasmin’s best friend begins to date her own real-life Mr. Collins.

This book is like a production of Pride and Prejudice wrapped in a modern retelling and the characters are very on the nose. As everyone is introduced, you can tell what part they’ll land in the production. Jasmin, our Lizzie, does have a moment or two when she thinks about her life paralleling that of Lizzie’s, but I had to wonder that she didn’t feel it more often. Maybe that’s too meta, but the characterization was so on-the-nose for people acting as these characters in a play that I couldn’t help but think someone must notice they’re living in a modern version of the story!

Anyway – Jasmin is more outwardly judgmental than Lizzie, especially about people’s physical appearances. That rankled a bit and so I didn’t necessarily find her loveable, though I still love the overall story. The Charlotte of the story is also a particularly rotten person and I was shocked – the end addressed it somewhat though, which I found satisfying. The play takes a backseat to the romance and drama, but that’s ok too. I actually think this would make a very good movie (with Matthew Goode as Harry Noble please!)

While I prefer Eligible slightly more, this is fun, contemporary retelling that’s quick to read and one I see myself revisiting. If you’re looking for an English P&P retelling with some low-key Bridget Jones vibes (yes, I know that’s a retelling too) then I think you’ll enjoy this.

British Vocabulary Bonus: Luvvie – an actor who is particularly effusive / Wazzock – a stupid or annoying person

Note: Unfortunately Melissa Nathan passed away in 2006 at age 37 – she did, however, write a Persuasion retelling titled Persuading Annie that I definitely plan to read.