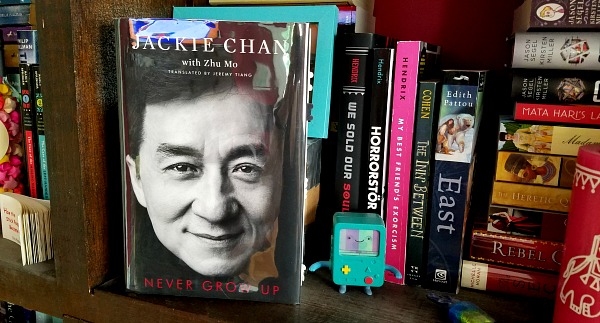 Jackie Chan wrote a book about his life!

I don’t really feel the need to blurb a memoir because the content seems pretty obvious. The book covers his experiences growing up, his background in kung fu, his start in films and his eventual rise to stardom.

I’ve always been a big fan of his films and he strikes me as someone who is genuinely friendly and caring – based on his book, I was right! You might think, “Well, of course, someone isn’t going to make themselves seem like an ass in their book.” But Jackie does admit when he was a jerk growing up and is very open about his past and current faults. So, I’m still right. He’s definitely a celebrity I’d enjoy meeting.

Jackie certainly had a rough upbringing. He grew up in China and when it became clear he wasn’t putting any effort into his schooling, his parents offered him the opportunity to attend a boarding school, the China Drama Academy. To do so, his parents needed to sign a contract for three, five, seven or ten years. They gave young Jackie (I think he was six or seven) the option to choose how long he wanted to stay and when he replied with “Forever!” his parents signed the ten-year contract. From that point on Jackie was the property of the master at the school – he writes that the master could have beaten him to death and gotten away with it. I can’t imagine experiencing a situation like that.

The CDA taught Jackie many of his moves though, and is what eventually lead him into a career in the movies. It was certainly an experience which could have broken and defeated someone, but Jackie’s always had an attitude geared towards success. It shows! Jackie also puts a lot of value on character and general outlook.

“Your life is decided by your character and the decisions you make in the moment.”

He takes filmmaking and action scenes very seriously. I didn’t know there was such a thing as a movement director and I learned a bit about what they do and Jackie’s commitment to both working with, and being, a good one. He also believes Hollywood should be recognizing more categories with their awards including Best Action Film, Best Movement Director, Best Male and Female Action Actors – I agree!

It shows throughout the book that Jackie’s beginnings made him want to work hard and work with others who work hard. He seems like a very supportive person when it comes to his stunt teams and co-stars. He’s always willing to give other actors or stunt people a chance to challenge themselves and push to get a better shot if they’re willing. He definitely pushes himself to the limit when it comes to getting the perfect shot.

“Whenever I hire a young ambitious person, it makes me think back to my early days and how I used to wish someone would give me a chance. If people hadn’t given me a helping hand, I don’t think I would have made it. Now I’m in a position to help others, and I give as much of a leg up as I can to young people who have really impressed me with their talent and attitude.”

His movies might seem cheesy to some (ok, some of them are cheesy, but in the best way), but I’ve always appreciated his skill and the lightheartedness of most of his films. After reading this book I understand that he’s been building a brand for himself and that he strives in many of his films to keep things light and positive.

“No matter what, I like films that bring people joy, the kind that sends you out of the theater with a smile on your face. Modern society is frustrating enough; there’s no need for more negativity in the cinema.”

It’s hard to review someone’s life. Who am I to judge their experiences and upbringing? But I do think Jackie has a great outlook on life and this was a pleasant book to read, despite the hardships Jackie has been through and the mistakes he’s made. I think the memoir comes off as authentic and even though he had assistance writing it and I’m reading a translated version, it still feels genuine to what I know of his character through his films.

I’ll end with this quote:

“When I realize that I might be doing the wrong thing, I’m glad to be called out, and I change. I’m also grateful to the people who praise me. Having people in my corner inspires me to work harder, and gives me the energy to try to be better in every way.”

I recommend this book for: