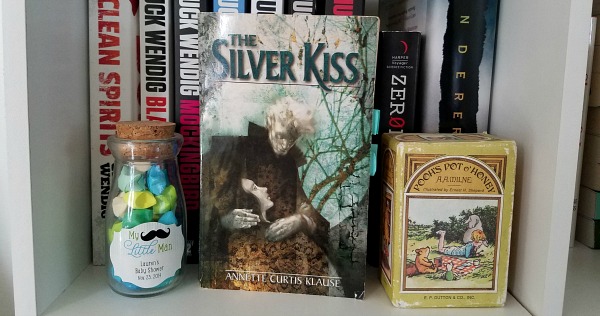 Zoe is struggling to come to terms with her mother’s illness and feeling invisible to her father when she falls in love with a vampire boy after knowing him for ten minutes.

I want to preface this by saying I love Blood and Chocolate, so this isn’t just another rant where I Shit On Cheesy YA That I Suspect I’ll Probably Dislike But Decided To Read Anyway™. Blood and Chocolate is certainly not a top-notch book, but for YA paranormal romance, I find it compelling and kinda sexy, and it’s a total comfort read for me. Other Klause fans have recommended The Silver Kiss, saying they love it even more than B&C. I thought for sure I’d at least enjoy this book. Sadly, I was (so, so) mistaken. I just wanted to explain all this so you know it’s possible for me to enjoy cheesy YA on occasion.

Now, on to the part where I Shit On Cheesy YA: This book is shit.

We already know I hate most YA character descriptions, but this book seems to go above and beyond when it comes to announcing how thin, pale, and big-breasted Zoe is.

“She had always been thin, but now her bones seemed hollow. Her wrists and joints were bruised with shadows. She was almost as thin as her mother, wasting away with cancer in the hospital….She had the same gray eyes [as her mother], long black hair with a slight curl, and deceptively pale skin that tanned quickly at the slightest encouragement.” This is from PAGE TWO.

But ok – let’s give the book the benefit of the doubt. Maybe it will address the topics of eating disorders, losing a loved one to cancer, and dealing with grief as an individual and a family. I mean, it won some awards (color me shocked), so perhaps there’s something deeper than just a romance between two empty-headed, pale, thin teens, one of whom just happens to be a centuries-old vampire?

Spoiler alert – this book is just about two empty-headed, pale, thin teens (one of whom just happens to be a centuries-old vampire) falling in love. While Zoe is frequently sad about her mother’s diagnoses, that’s pretty much where it ends. Zoe’s father is almost never home. He pays her almost no attention – he has no idea how frequently she skips meals or how badly she wishes he were there to support her through this shared grief. Her mother is simply in the story as A Character Who Is Dying.

This is illustrated by a scene where Zoe confronts her dad about how she wants to see her mother more, instead of always being told to stay away from the hospital:

“ ‘Don’t either of you love me anymore?’ she said.
‘There’s no profit in arguing,’ [her dad] said, trying to pat her shoulder.”

What in the fuck? Her dad can’t even be bothered to say something cliché like “Of course we still love you honey, but things are really difficult for your mother right now. I’m trying to do what’s best for her.”

There is no depth to what is happening to Zoe and her family – she might as well start the story off with no mother, a la Disney movies. There could have been so much more here, underneath the veneer of the gossamer-thin romance between Zoe and Simon.

Ah, Simon, how I loathe thee. I have a note that says “20 pages in and I already fucking hate Simon.” Nothing changed from that point on. Simon, of course, notices how thin and pale Zoe is (read: attractive) and also her big tits (because of course, when your body is literally wasting away, your breast size doesn’t change one bit). But he notices this in the creepiest way. (Side note: There are several references to Zoe’s big boobs throughout the book and not just by Simon – even her best friend has to point out how big they are!)

“She was beautiful, dark like the night, but thin, as if one of his brethren had already claimed her….There was something voluptuous about her, though, that reminded him of death. Big breasts, too, he thought, and chuckled at his particularly human preference.”

When he says dark like the night, I assume he’s referring to Zoe’s hair because we already know she’s white as hell.

And another gem: “ ‘Beautiful,’ he whispered. ‘Pale as the milk of death, thin and sharp like pain.’” WTF is the milk of death?! I’m just picturing a skeleton in a reaper cloak drinking a big-ass glass of milk and honestly, I’d rather read a story about that character than talk any more about this book. But, alas, I must persevere, for your sakes.

So Simon is basically an angsty teen boy, despite being born in like 1650. I mean, I know vampires stop aging, but usually, when they’ve been around for a few centuries, they tend to become at least somewhat more mature…and jaded and bitter and probably depressed – all of which makes them more interesting characters. Simon is like almost 350 years old and he’s over here like, “Heh, she’s got tig old biddies. Me likey.”

And that’s like, their whole connection. They both have the same body type (except, of course, for Zoe’s huge bewbs) and they’re lonely. Simon immediately feels some sort of deep connection with Zoe, but we never really understand why. She doesn’t even smell good like Bella apparently did. If I wanted to be generous – and I don’t – I could say Zoe was thralled by Simon and that could be her excuse. But this book isn’t even that clever.

Nothing about the plot really matters. Not Zoe’s family drama, and not the danger from Simon’s little brother who is like five physically, but also a really old, psychotic vampire. Somehow that little kid mentally aged into a pretentious, old, murder-machine, but Simon stayed fifteen forever. Anyway, Zoe is in danger for like three seconds, but it turns out ok. There could have been some interesting drama from Simon’s family here, but…there wasn’t.

Oh also, it’s Halloween at one point and Zoe isn’t prepared because she forgot it existed or whatever. So instead of keeping the lights off, like literally anyone else who doesn’t want to partake in Halloween, she rummages around for random cookies (which I assume she’s handing out unwrapped) and then when those run out, she hands out pennies. What the hell?!

Ugh. Anyway. I hated this. The plot is boring, the characters are boring, the romance is non-existent, and there weren’t even any swoon-worthy sexy vampire scenes. It’s just a bunch of missed opportunities for Klause to delve into some deeper thematic content. I hated everything about it, except for the ending, because at least Simon dies. Klause has another book, about an alien, and that’s going to be a hard pass from me, bro. I’ll stick to B&C!

If you like The Silver Kiss, please tell me why – I’m generally baffled! Do you like B&C as well?
Is there an author who you’ve read that you loved one book by them, but really hated another?

[·_·[] I felt like posting, but not like formulating any sort of mini review for the books I've read. So, here's another picture of Phoenix Extravagant. 🤷🏻
[·_·[] Today I bring you my February wrap up.
[·_·[] if you're interested in the general lore and medicinal properties of common plants, then j recommend Folk Magic and Healing from @liminal_11. They sent this to me in exchange for my honest review and I found this to be a lovely little book.