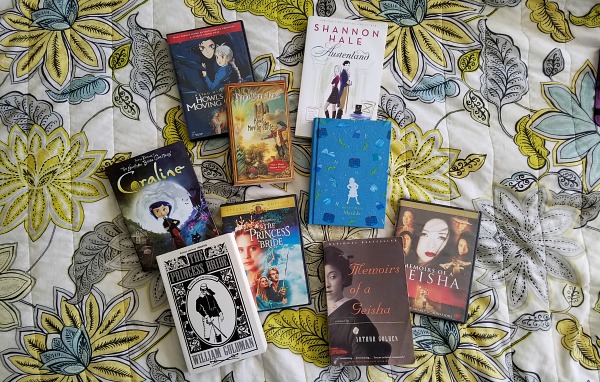 I’m a notorious book snob and it’s no secret that most movies based on books disappoint and/or enrage me. I’m rarely excited about upcoming movie adaptations (example: Ready Player One) and you can typically find me rolling my eyes at trailers and grumbling about the issues I’ve already spotted.

END_OF_DOCUMENT_TOKEN_TO_BE_REPLACED

Underrated books – we all have a list of books we love that we think don’t get enough attention. I sort of love this because sometimes books get so much hype that they don’t live up to people’s expectations or might be ignored by someone because everyone and their brother and their cat is telling them they have to read this damn book. But at the same time, I want to talk about some of the books I love that are less well known.

END_OF_DOCUMENT_TOKEN_TO_BE_REPLACED

To round out my celebration of Jane Austen’s work, I watched a few movie adaptations she inspired. Naturally, I started with my favorite (hint: I rhymes with Bostonhand).

END_OF_DOCUMENT_TOKEN_TO_BE_REPLACED

It’s February once again, so that means it’s Austen Month. Why? Because I started focusing on Jane Austen’s work in February two years ago and now I’m just going to keep doing it…until I stop! This year I’ve picked six books (though Austenland is really just an optional re-read, so it’ll be last on my list) that include modern retellings, a paranormal reimagining, and non-fiction.

Netflix has decided to pull almost everything Austen related (grrr!) so my movie options are limited but I’ll probably rewatch Austenland and Clueless (it’s Emma!) and Becoming Jane. I might watch Death Comes to Pemberly, but I’d like to read the book first, so we’ll see.

I’m also participating in a read-along of Gone with the Wind with some lovely ladies on Instagram, so you might see some posts about that as well.

Jane Hayes has a pretty good life – except that she’s had a string of terrible relationships and she’s holding out for her fantasy man, Mr. Darcy. When a distant relative leaves Jane a vacation to Austenland in her will, Jane has a chance to live out her fantasy and hopefully get all that Darcy craving out of her system and face the real world. Or perhaps she’ll find her own Darcy after all?

I’ll admit, I saw the movie first, unaware there was a book. The movie was adorable (I love Keri Russell) and it turns out that it was pretty faithful to the book – which makes sense because it looks like Hale helped produce and write the screenplay.

END_OF_DOCUMENT_TOKEN_TO_BE_REPLACED

A sentimental longing or wistful affection for the past, typically for a period or place with happy personal associations.