Jason Dessen enjoys his life, his time with his family, his job, though maybe he takes these things for granted, as maybe many of us do. Then he’s held at gunpoint, given a mysterious drug, and wakes up in a strange hangar surrounded by unfamiliar people who are very familiar with him. He’s still Jason Dessen, but single, and a successful scientist working on a groundbreaking device that he was the first to successfully navigate. Are his memories of his wife and son merely a dream? Has he gone crazy? Could both lives be real? Jason will go to extreme measures to regain the life he considers to be a reality and make incredible discoveries along the way.

Ahem. Let me compose myself.

I’ll come right out and say I know nothing about the science behind the theory Crouch uses in his book, nor did I understand much of what Jason explained in regards to how it worked, but I’m willing to suspend disbelief and take his word that multiple realities are plausible. Thankfully there isn’t too much jargon, so I didn’t feel overwhelmed and I get the feeling the casual reader isn’t supposed to understand the finer points of how this plays out.

I find it mind boggling to think there could be an infinite number of versions of myself and my life, all similar and yet, so different. If I met my other selves, would I still think of them as me? Would I like what I discovered? What parts of us change based on the myriad of decisions we make daily? Jason wonders what his “essential self” is (personally I’m not sure if something like that can truly be defined) and for his character, his family certainly plays a large part.

But even Jason’s desire to be back with the exact copies of his wife and son that he considers part of “his reality” doesn’t define him. Each iteration of Jason cares for his wife and son, but in different ways, and they behave differently in order to reach them.

The action and pacing were solid. I was hooked from the beginning and couldn’t help but root for “Jason1” as I thought about what would happen if I woke up and my life was suddenly replaced with an alternate version and my family was changed or non-existent.

I don’t often read deeply, but I do get excited when sci-fi (or any genre, I suppose) really gets me thinking and has me questioning my reality. This book doesn’t just address the big choices, like who you married or having a child or not, but the little ones as well, like going to the bar after work or going straight home. From each choice branch new choices, all leading to other realities and versions of yourself that are slightly (or not so slightly) altered.

I am definitely interested in reaching more of Crouch’s work and I highly suggest this action packed book if sci-fi thrillers are what you’re into!

I received this book for free from LibraryThing in exchange for an honest review. This does not affect my opinion of the book or the content of my review. All opinions in this post are my own.

The Death Cure
By James Dashner

Considering that I’m really not going to discuss the details of the plot here to avoid spoilers for anyone who hasn’t read the first two books, The Maze Runner and The Scorch Trials, I figured I’d just do a mini review. The Death Cure is the finale to the series and starts right up where book two leaves off. As usual, I enjoy Dashner’s cliffhanger chapters, as they help propel me through the book.

END_OF_DOCUMENT_TOKEN_TO_BE_REPLACED

The Maze Runner
By James Dashner

Thomas wakes up in a lift, no memory of where he is or who he is, only his first name. He soon discovers he’s been trapped in The Maze with about 50 other boys, all clueless as to their past and striving to solve this impossible puzzle and make their escape. The Maze changes daily and is full of dangerous creatures, but all the boys hold the hope that whoever put them in this place, left them with a way out. Thomas is determined to become a Runner, someone who explores the maze and find an escape route. The day after Thomas’s arrival, however, a girl arrives – the first to be sent to The Maze – and everything changes.

END_OF_DOCUMENT_TOKEN_TO_BE_REPLACED

John Redlantern lives on the planet of Eden with over 500 other members of Family. They are sheltered in the Forest under the light of the lantern trees,  but beyond the safety of their home lies a planet cloaked in darkness – no sun to light the sky each day – and unknown territory that no one from Family has dared to brave. The Elders tell a story of how a spaceship landed on Eden over 100 years ago, leaving a couple stranded – but someday Earth will return to take it’s lost children home. But 15-year-old John begins to question the lore of Family and starts to explore the darkness beyond Forest – what he discovers will change the lives of every member of Family.

END_OF_DOCUMENT_TOKEN_TO_BE_REPLACED

Ready Player One
By Ernest Cline

Ready Player One takes place in 2044 – the world is suffering from an energy crisis, a food shortage, and an economic decline, all creating a dystopia for all but the wealthy. But for anyone who has access, the virtual world of OASIS can be just that – an escape from reality – where you can create an avatar and be anyone you want, hunt for treasure, and even attend school. When the founder and creator of OASIS dies, he sets up a Willy Wonka-esque challenge – the first player to find his easter egg wins complete control of his company and fortune. Wade Watts wants nothing more than to escape his real life by winning the prize, but the contest is more dangerous than he ever imagined.

END_OF_DOCUMENT_TOKEN_TO_BE_REPLACED

From the back of the book: “Saga is the sweeping tale of one young family fighting to find their place in the universe. When two soldiers from opposite sides of a never-ending galactic war fall in love, they risk everything to bring a fragile new life into a dangerous old world.” Readers are started right in the middle of the action, as Alana and Markus deal with the birth of their first child and they are forced to flee due to being discovered by both of the warring factions. There are hired assassins from both sides of the government out to kill the couple and steal their child. Meanwhile, the couple just wants to be free of the never-ending war and find a safe place for their newborn.

END_OF_DOCUMENT_TOKEN_TO_BE_REPLACED 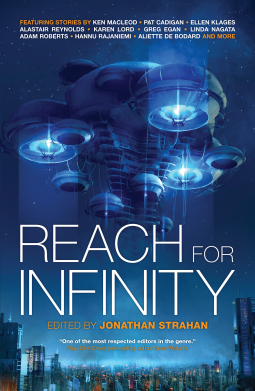