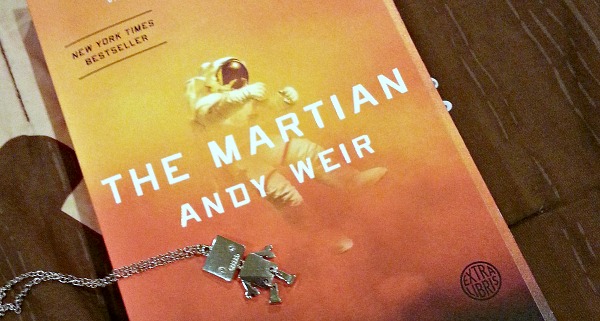 The Martian
By Andy Weir

Mark Watney is accidentally abandoned on Mars during an emergency evacuation and thought to be dead for weeks. But Mark survived and is scratching out a living as the lone man on Mars based on his ingenuity and remaining resources. But can he survive long enough for those back on Earth to try to put together a rescue mission – will that mission even be possible?

What I like:
This is another book where I just want to say “Oh my gourd, go read it!” and just let you experience everything for yourself. I was hooked from page one and instantly appreciated Mark’s wit and sarcasm. I present you with the opening sentences:

Well, that got my attention!

Mark makes this book – considering more than half of it is his personal log of his new life trying to survive on Mars, this is an important part. I instantly liked him as a character and while he’s a smartass, he’s also very smart. He’s primarily a botanist, and his skills actually help him to survive. He’s crafty with his resources and I don’t want to give away much, but I’ll say that he bounces back well from any mishaps. That’s another great part – Mark is not some super genius who flawlessly carves out his life on Mars. He miscalculates, he makes stupid mistakes and he gets knocked down. There’s a lot of science and math in this book and I’ll be honest, I have no damn clue if it’s accurate, and I don’t care. It felt accurate and that was enough for me. Surprisingly enough, while I didn’t understand most of Mark’s calculations, I didn’t feel bored or lost while he was working through them – it genuinely felt like a man keeping a log of just how he planned to try to survive on Mars for as long as he possibly could. Those of you who are actually knowledgeable about spacemath and sciencejunk might actually enjoy this book even more.

Part way through, we’re given insight into the lives of people back on Earth, as well as Mark’s other crew members. At first, I thought it might disrupt the journal-like flow of Mark’s logs, but it actually added essential detail to the story and there wasn’t a single page in this book I didn’t enjoy.

Here are a few more quotes that made me chuckle:

“I used a sophisticated method to remove sections of plastic (hammer), then carefully removed the solid foam insulation (hammer again).”

“Now that NASA can talk to me, they won’t shut the hell up.”

Oh! I know. I have the paperback edition, and they designed the cover to have a shorter edge, so you can see the page beneath it, which they also made to be the same color as the cover background. So, why do that? It’s ugly and I don’t think it lends to the design.

Seriously, if you’re at all interested in a realistic sci-fi read (meaning no aliens and space fights, etc) then check out this book. I had a hard time putting this down and I enjoyed waffling back and forth between how I thought the book ended. Mark is an excellent main character who kept me laughing, despite what I consider to be a harrowing experience. I also hear (according to IMDB) they’re making this into a movie and if it’s done right I think it will be fantastic.

6 thoughts on “Book Review: The Martian”