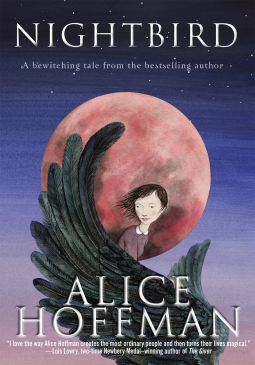 From NetGalley: Twelve-year-old Twig’s town in the Berkshires is said to hide a winged beast, the Monster of Sidwell, and the rumors draw as many tourists as the town’s famed pink apple orchards. Twig lives in the orchard with her mysterious brother James and her reclusive mother, a baker of irresistible apple pies. Because of a family secret, an ancient curse,Twig has had to isolate herself from other kids. Then a family with two girls, Julia and Agate, moves into the cottage next door. They are descendants of the witch who put the spell on Twig’s family. But Julia turns out to be Twig’s first true friend, and her ally in trying to undo the curse and smooth the path to true love for Agate and James.

The only book by Hoffman I’ve read is Green Angel and I loved it, so when I saw Nightbird, I figured I’d check it out, even though it’s middle grade and not YA. Sadly, Nightbird just didn’t captivate me and I think the main reason is that the book feels too young for me. I expected a little more depth out of this story and wasn’t getting it. I don’t consider it a bad book, but I think this is just one of those reads that I’m too old for, though 10-year-old me probably would have enjoyed it.

My biggest issue with this book was the length – I think if it were twice as long, the characters and plot could have been developed more and I would have had a chance to make a connection with them. Twig isn’t a terrible main character, but she was a little dull. Due to her family secret she isolated herself, but maybe to the point of being so one-dimensional that it made it hard for me to connect with her. Throughout the book, considering Twig’s non-traditional nickname (her actual name is Teresa) and the theme of birds, I couldn’t help but think about Nest, which I read last August and wishing this book were as captivating as that.

I also think the fantasy element in this book was a bit…awkward. This ancient curse manifests itself in a way that would not happen in our world and everyone seemed to instantly be okay with this. I won’t give it away, but there was no shock, no confusion or disbelief from any character when this element was revealed, yet the world Hoffman built felt like it was supposed to be similar to the one we live in today. I wasn’t convinced that an entire town would willingly accept this magical presence in their lives without question or complaint, then agree to keep it a secret from the rest of the world.

My last main issue is regarding some glaring safety issues I noticed while reading. At one point a monster hunt is announced in the town (I had a hard enough time accepting that even a backwoods town would actually hold a monster hunt for something they’ve never seen) and the townspeople are encouraged to bring “bats, guns, knives” and more. Uh, hello?! Pretty sure that’s not legal and there’s  no law enforcement that would allow ordinary citizens to march around town, guns blazing, to hunt down a monster! There’s a point later in the story where one of the characters was thought to be trapped in a burning building and the sheriff wouldn’t agree to send firemen in to rescue her unless her parents had proof she was in the building. What? It was a poor setup for her rescue and while I know this is children’s fiction, these two instances really stood out in a bad light.

But there are themes of honesty, friendship, self-discovery and being true to yourself and this may well be entertaining for younger readers. Personally, I just expected more depth and even a little more magic. I’ll still check out more of Hoffman’s work, but I’ll stick with YA and adult fiction.

[•_•[] starting a new book in our new house.
[•_•[] The struggle is real but I'm still working on reading more. Just finished Malice by Keigo Higashino and it was pretty good! I decided to just pick a book at random off my shelves and ended up reading this mystery/crime drama. It's not a genre I read often and maybe that's part of why it felt fresh, but this book is all about finding the motive, not the killer. It's also set in Japan in the late 90s, though it has a sort of timeless feel to it. It's maybe worth checking out if you like this sort of thing 🤷🏻‍♀️
[•_•[] oh hi, this is still a @bittybittyzap fan page 🤣