I won a copy of this book from LibraryThing in exchange for my honest review.

Felix and Lee Vickery live separate lives in the same house. Lee and his mother serve Memory and Felix and his father serve Death and while the boys can meet, neither can see the parent they don’t live with, nor can that parent see them. This has been the Agreement for their whole lives and the boys have done all they can think of to break it. When Gretchen Whipple comes into their lives stirring up trouble, the twins believe they might have finally found someone who could help them break the Agreement. If, that is, they can outsmart Death.

The cover caught my eye when I was browsing the LibraryThing Early Reviewers page (I mean, come on, isn’t that color combination gorgeous?!) and when I saw it was a dark middle-grade, I slammed the request button. I’m so happy I won a copy! This was a great read, perfect for the fall/Halloween season.

In this world, Death, Memory and Passion are “living” beings, called Shades, and each town has their own trio, unbeknownst to most folk. The Vickery adults serve Death and Memory as apprentices and their sons are being trained to follow in their parents’ footsteps. Felix and his father service Death – Felix’s father is the local doctor, creating various tinctures, ointments and cure-alls to help those whose time hasn’t come yet, and watching over those lives Death extinguishes. Lee and his mother serve Memory – I’m not actually 100% sure how Lee’s mother is seen to the community. Magic isn’t widely known or believed, yet his mother is able to remove memories (both bad and good) from people’s minds and hold on to them. I suppose she could be viewed as a sort of therapist, but I’m not sure if people know they no longer have certain memories after visiting her. We don’t learn too much about Passion, as she’s not really the focus of the story.

In addition to having to assist their parents and essentially train to be apprentices, the boys live in separate halves of the house, east and west. Lee and his father literally can’t see or hear each other, even if they happen to be in the same room. Same goes for Felix and his mother. Their parents can’t see or hear each other and haven’t since the twins were born. On top of that, Felix is blind in one eye and wears an eyepatch – but if he lifts it up, he can see Death or Memory (and Passion). In turn, Lee is deaf in one ear, but can hear Death or Memory in that ear, should they choose to speak to him. Memory tends to hum a lot. This is all part of the Agreement. The expectation is that when the boys turn 16, they will sign contracts to Death and Memory and serve as full-fledged apprentices. Both boys are trying to find a way to avoid the contracts and break the Agreement so their family can be whole. 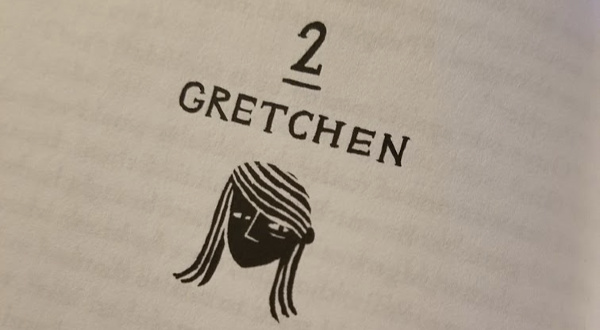 Lee is boisterous and outgoing and was raised in a somewhat normal environment. He can attend public school and his job is mostly just canning and labeling the memories his mother and Memory extract from their visitors. Felix, on the other hand, tends to be more serious, as he’s been forced to witness townsfolk die from a very young age and he’s not allowed to attend school or even leave the wood surrounding the house, except on Halloween. Then you have Gretchen; she comes from a long line of Summoners, those whose job it is to keep the Shades in line in service of the townsfolk. But only the first-born learns the Rites required to become a Summoner.

Gretchen feels ignored by her father, who happens to be the mayor, and harassed by her older brother, who is a bit of a rebel. Gretchen is rebellious herself, angry at her family, angry because she isn’t allowed to learn Rites and angry because she believes something suspicious is going on after the death of a classmate, but no one will listen to her. Gretchen is one of those annoying characters that grow on you – her attitude and anger are justified, but that doesn’t make her an easy character to read about. But she definitely shows the most growth throughout the story.

I enjoyed the characters and the plot was unique. I did wonder why Death, Memory and Passion were picked as the only three Shades to exist, but I can imagine the book would be pretty lengthy if more Shades were involved. You could definitely make an argument for those three things having a large part in everyone’s lives. I liked how each town has its own crew of Shades – they can have different personalities and ways of doing their job. It’s remarked that the Death in Chattanooga has his apprentice hand out chocolates to sweeten the journey to the afterlife.

This was a solid read with compelling characters, Felix being the most engaging given the solemnity of his “job.” The end wrapped up a little quickly, but I’m not too bothered by it. If there was a sequel (I could see it going either way), I would certainly pick it up. It wasn’t as moving as I’d like, though there are some decently emotional scenes.

4 thoughts on “Book Review: The House in Poplar Wood”