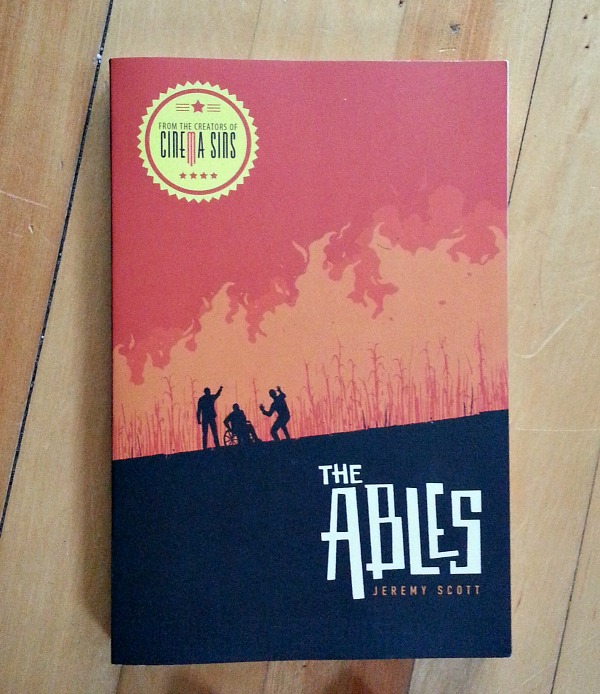 The Ables
By Jeremy Scott

Imagine sometime after you’ve turned twelve, your family moves to a new town just before school starts up again. Your dad then tells you it’s time to have “the talk” and you panic – not the birds and the bees, gross! – and takes you to a corn field at the edge of your new town. But as it turns out, this talk isn’t what you expected – your dad tells you that you’ve moved to a town full of people with superpowers, that he has superpowers and that you’re actually starting to develop your own powers! You’re telekinetic like your father, so you can move things with your mind. Now imagine how being blind is going to impact your powers. In fact, your new school, full of other kids with superpowers, has placed you in the special education class with other children they feel are disabled, despite having powerful abilities. Philip Sallinger is both more powerful than the average human boy, yet considered less powerful by his peers due to his blindness. He and his new friends must come to terms with their new abilities and also with the stigma of being classified as disabled. On top of all this, a strange figure arrive and starts to stir up trouble that Philip and his friends can’t seem to stay out of. They must find a way to overcome their difficulties and work together to save the town.

The Ables gives a fresh take on superheroes that I thoroughly enjoyed. Scott adeptly handled the social stigmas of having a disability and mixed them with the excitement anyone would feel upon discovering they have powers. Sure, Philip and his friends have superpowers, but their peers do too, and they consider being blind a disability, especially when your power requires visual knowledge of an object to judge it’s weight and lift it with your mind. Philip never previously considered himself disabled, despite being blind, but has to deal with some discrimination from others with powers who feel he and his friends cannot act in the same way other heroes can. Philip and his friends are highly determined, funny and flawed, making them believable and likable characters.  I especially enjoyed the way they learn to mix their powers to overcome some of their disabilities.

As one of the creators of Cinema Sins (as the seal on the cover will tell you), Jeremy’s ability to nitpick and point on sins in movies is wonderful and hilarious. I feel I have to sin the book *ding!* for the monologuing villain, but it’s all in good fun. In the superhero world, there’s something classic about a villain who feels the need to spend time doling out exposition rather than just annihilating the heroes. Overall, it really didn’t bother me and at least lent some depth to the villain. I also felt that considering the children were going to school just for heroes, there should have been training courses to assist them in developing their newfound powers, but there was nothing of the sort. There are also a few minor editing and typography issues *ding!* that occasionally pulled me out of the story, but only for a moment and there weren’t enough of them to make me mad.

Overall, this is a solid debut novel. I do wish some of the other students and their powers were given more of the spotlight, as the story mainly focused on Philip, Henry and Bentley, but perhaps we’ll get to know them more in the next novel that I’m sure Scott will be writing (and that I’ll be sure to read once it comes out). If you’re looking for a fun superhero novel to fill some time this summer, check out The Ables.

2 thoughts on “Book Review: The Ables”