Anyway – I figured I’d do a post with some nice pictures now that my arm is healed and give a brief explanation of what I chose to get. 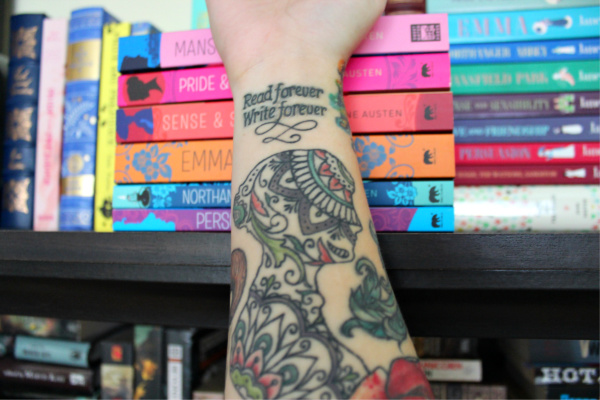 First up, we have my girl, Jane Austen. (Ugh, if I’m honest, Jane probably wouldn’t be my friend if we were around now. Why do I think that? Idk, I guess I think she’d be too cool and smart for me. Yes, these are things I think about sometimes.)

I wanted her portrait, but not like, a realistic one, because I’m not into that. I had Emily, my tattoo artist, jazz up her profile with some mandala work she designed. I hate to pick favorites because I love all my tattoos, but I’m really, really in love with how this came out. It should be pretty obvious why I chose Austen (maybe check out the background if you’re still unsure.)

I’ve had the ‘read forever write forever’ tattoo on my wrist for several years, but I had Emily go over it and jazz it up with the flourish on the F. The reasoning behind this should be pretty obvious. I was inspired by an old commercial for the Nook; their tagline in the ad was ‘read forever’ and I decided I wanted that on my body! I added ‘write forever’ because there’s nothing to read if no one’s writing it! It’s also a reminder to myself to pursue my personal writing project. 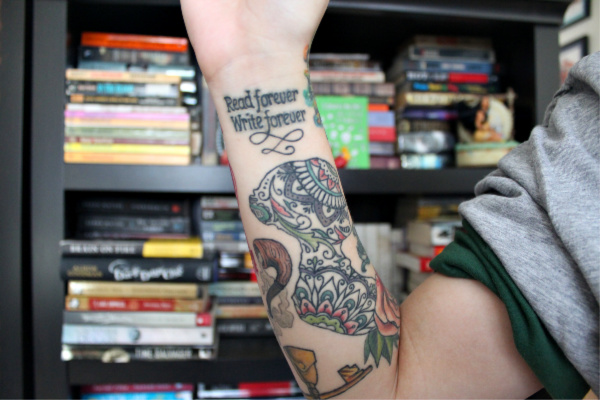 This shot is semi-awkward, but whatever. Insider info: I took all these pictures myself because I was too lazy to go downstairs and ask Sweetbeeps to help with my photoshoot. Yes, I’m that ridiculous. But I didn’t want to have to explain to him what shots and angles I was looking for, so I just contorted myself! 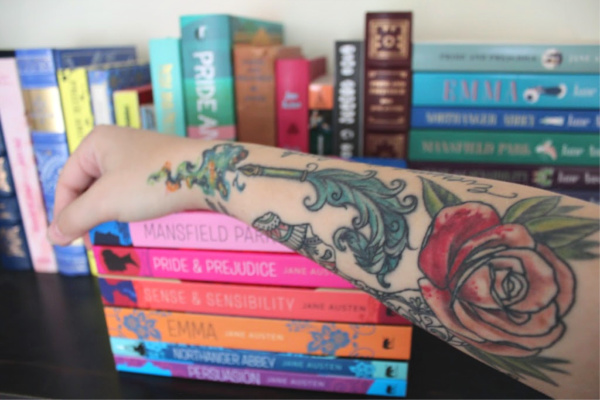 I’ve also had the quill for a little longer than my wrist tattoo. I had Emily jazz this up too because no way was I leaving it greyscale when I was getting all these other fabulously colored images around it. I’m so much happier with it now – at the time I first got it, it was my first openly visible tattoo and I worked retail at the time, so I was worried about having to cover it and too scared to go bold and get what I wanted. Those days are long gone! My reasoning for this tattoo is that I love writing and also quills.

I’ve seen so many cool galaxy tattoos – including one Emily did for my friend – and I wanted something to represent my love of sci-fi so I combined the galaxy with ink. I love it. If you want to get deeper (I really don’t go too far into meanings for my tattoos; I’m just not the type) it can symbolize the endless opportunities and creations writing and the human imagination can produce! That’s the answer I use for those people who really need a reason for why I have all my tattoos.

This rose represents my love of Alice in Wonderland. I contemplated the old ‘drink me’ bottle, but that’s a pretty common one (right up there with the Cheshire cat and Mad Hatter probably). I felt the rose fit nicely near Jane and the splattered paint has a bit of a morbid touch, as a reminder that the queen totally beheaded those poor goons who planted the wrong roses.

Yo, I love Sherlock.

There are a lot of books, series and authors I love. But one close to my heart is the Sabriel series (Abhorsen series? Ok, I love it a lot but I don’t know the official name for the series, back off!) by Garth Nix. A friend and I read the first book in high school and I’ve loved it ever since. It’s a series I’ve come back to many times and can’t wait to re-read. Garth Nix created an amazing world and characters. Plus, Tim Curry narrates the audiobooks for the trilogy and it’s divine. I chose the crossed bell and key for their significance in the story, but I also love vintage keys and my grandmother had a bell collection when I was growing up.

Everyone knows I love The Hobbit right? I wanted the Smaug doodle that JRR drew because it’s perfect and adorable. Emily did a fantastic job and I’m happy with my choice of a red outline. She did an awesome job on that sword too, which covers my love of the fantasy genre. 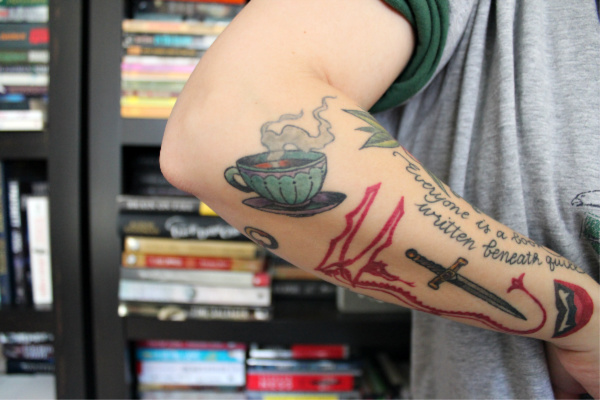 I love tea, not just while I’m reading, and I have a little teacup and teapot collection, so I figured I’d throw that in there too.

Christopher Moore is another author I chose to honor (haha jk, my ego isn’t that big) in my half-sleeve. Again, if you’ve been around, you’ll have seen my posts where I’ve gone to his signings. The vampy grin is featured on the spine of one of the books in his trilogy about vampires living in modern-day San Fransisco. Which you should read, if you enjoy modern paranormal fantasy with a heavy dose of comedy. Bloodsucking Fiends, the first book in the trilogy, was one of the first books I read by Moore and I fell in love. Also, I love vampires.

Don’t think for a minute that I forgot about my true love, Tanith Lee! She has a quote I found somewhere (damned if I can find it again though) where she says that everyone is important because everyone is a book. I tweaked it to add written beneath quill because, well, there’s a quill on my arm! I couldn’t think of one symbol or element from her books because they’re so varied and a lot of what I love about her work doesn’t translate into a tattoo. It’s a feeling in my soul. Ahem. Anyway.

Well, there you have it! A little tattoo tour, which you hopefully enjoyed. Do you have any literary tattoos? I’d love to see them!

14 thoughts on “My Literary Tattoos”